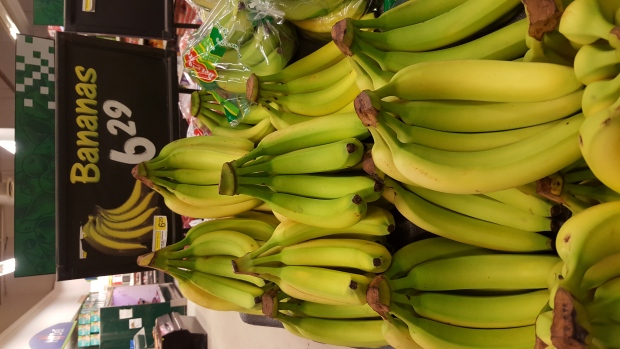 Bananas are shown for sale at a store in Sandy Lake, Ontario. (Sandie Benitah/CP24.com)

As part of their effort on diabetes education, Ontario Works in Sandy Lake gave a smoothie demonstration to passersby, in an attempt to show how easy, healthy and tasty these drinks can be.

At the end of the demonstration, staff handed out a pamphlet complete with recipes and a grocery list of things to buy.

But as one astute participant remarked, making a smoothie around here would cost more than $12 each to make at home and that’s obviously not including the cost of a blender.

Life in a remote community with no road access the majority of the year can be inaccessibly expensive, especially when it comes to food.

At Northern, the only major grocery store in town, a banana bunch costs $6.29/kg. A 2 Litre bag of 2 per cent milk costs $14.39. A pint of strawberries costs $11.59. Prices no one in Sandy Lake or even in a posh Toronto neighbourhood like Forest Hill should ever have to pay.

The price of chocolate, pop and processed food is a bit more reasonable, only tending to be a dollar or two more than what the rest of Ontario tends to pay.

If you suffer from allergies, you’re in more of a bind.

My first day here I met a beautiful pigtailed 19-month-old girl named Quent. She suffers from several allergies, her aunt told me, including milk. While Northern does sell formula, soy milk, almond milk and other alternatives aren’t sold locally and so her family needs to fly out of this community to stock up on supplies.

There are some solutions. Some families tend little gardens in their backyards and grow their own vegetables. Hunting is also a sacred part of life. This community welcomes the fall by shutting down for a week to allow people to hunt and fish for their protein.

Berry picking is also an important tradition here and next week, to celebrate the blueberry harvest, Ontario Works will drive people out deep into the bush over several days so they can pick their own bushels of blueberries.

And once again, there’s money to be made from people who missed out on the opportunity. On the local buy and sell Facebook group, one person is currently selling five small sandwich bags of blueberries for $35.

But at least on Facebook there’s competition to keep the prices down. One buyer was quick to try and bargain with $20 – a tactic that unfortunately would never work at the supermarket and a price that’s still too high to pay for a basic right to health.

A bottle of water is shown for sale at a store in Sandy Lake, Ontario. (Sandie Benitah/CP24.com) 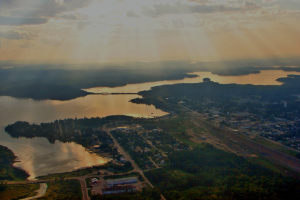