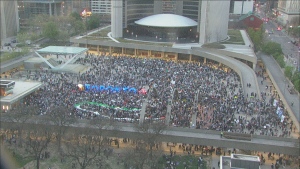 Thousands gathered at Nathan Phillips Square in solidarity with Palestinians in Gaza.

Three people were charged after incidents at Saturday protests in Toronto concerning the provincial lockdown and the Israel-Palestine conflict, including a man accused of biting a police officer and another incident where a man was allegedly struck in the head with a wooden stick.

The first charge was laid during an anti-COVID-19 lockdown march that began at Queen’s Park on Saturday afternoon and snaked its way through many downtown streets.

Toronto police say more than 5,000 people attended the march between noon and 4 p.m.

At one point, police allege a 24-year-old Mississauga man assaulted two police officers, biting one of them.

Const. David Hopkinson said the assault was “unprovoked” and occurred while protesters were gathered at Queen’s Park.

He was arrested and charged with two counts of assaulting a peace officer and mischief.

He appeared in court at Old City Hall on Sunday.

Toronto police say during a second demonstration more than 5,000 people gathered in Nathan Philips Square on Saturday night, the majority of them demonstrating in solidarity with the Palestinian’s suffering through Israeli airstrikes in Gaza, and a smaller group demonstrating against rocket attacks on Israel by terror group Hamas.

A CP24 reporter saw bottles thrown in the square and sporadic instances of people shoving each other.

Police said a 29-year-old Toronto man was arrested in the square for allegedly bringing a weapon to the demonstration, and a 22-year-old Thornhill man was charged with assault.

Officers said more may be charged in the coming days.

“Police are continuing to investigate this event and have been clear that organizers and attendees of events are subject to enforcement and that charges can be laid in the days following events,” police said in a statement issued on Sunday.

After the gathering at the square, several videos circulating on social media showed several masked men, one with a Palestinian flag pinned to his back, attacking an older man with what appeared to be wooden sticks.

“I have been in touch with (Toronto Police) Chief James Ramer and have made available to him a video of a particularly disturbing incident which had been sent to me.”

"Hate, anti-Semitism and violence have no place in our city," Tory said.

A second video provided to CP24 shows the alleged victim of the assault moments earlier, appearing to brandish a short stick or baton during the confrontation between a group of Israel supporters and a group carrying sticks and several Palestinian flags.

A Canadian Press photographer later captured images of the same man holding what appears to be a short blade.

“Officers are continuing to gather all available videos from the scene and area that day, to establish the full circumstances,” she told CP24.

Ontario Premier Doug Ford also released a statement Sunday afternoon, saying acts of violence and expression of anti-Semitism have no place in the province.

"This behaviour is totally reprehensible & should be investigated by the police. Discrimination or hatred of any kind against any community in our province should never be tolerated," Ford said.

The assaults appeared to occur near the downtown Toronto bus terminal.

Police said they were “actively investigating the incident” and urged anyone with information to contact 52 Division.

When asked about the new images and video, Tory’s office referred CP24 to comments he made on Monday, where he said his original comments were based on the videos of the incident he had received at the time.

“The videos I was sent by people, I have sent them all along to police. And my own comment said that violence against anybody whether it was motivated by anti-Semitism or against any other group was unacceptable, and I stand by those comments.”

“We’ll all await the results of the police investigation because they’re uniquely positioned to take a look at all of the videos and speak to all the witnesses and reach a conclusion about what happened.”