Motorcyclist in life-threatening condition after collision in Mississauga 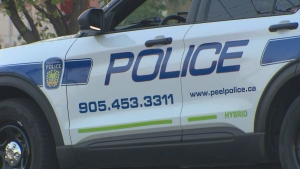 A motorcyclist is in critical condition after colliding with the driver of a car in Mississauga Friday afternoon.

Emergency crews were called to the intersection of Meadowvale Boulevard and Syntex Drive, west of Mississauga Road, just before 3 p.m.

Police say the motorcyclist suffered serious injuries and was taken to hospital.

The motorcyclist’s condition later worsened and is now in life-threatening condition, police say.

The driver of the car was also transported to the hospital with non-life-threatening injuries.

The Major Collision Bureau is investigating the cause of the collision.