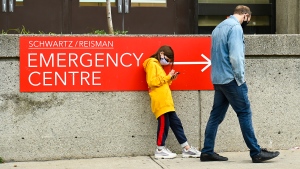 Ontario is reporting 790 new cases of COVID-19 and nine additional deaths on Wednesday, as the province continues to battle a second wave of the virus.

Two of the new deaths were among long-term care residents. The province’s death toll due to the disease now stands at 3,062.

Wednesday’s new infections are a drop from the 821 cases logged on Tuesday but the majority of cases are still emerging from the province’s COVID-19 hot spots.

“Locally, there are 321 new cases in Toronto, 157 in Peel, 76 in York Region and 57 in Ottawa. There are 719 more resolved cases,” Ontario Health Minister Christine Elliott tweeted Wednesday morning.

Elsewhere in the GTA, 43 new cases were recorded in Durham Region and 24 infections were logged in Halton.

The seven-day rolling average of new cases in Ontario now stands at 753.

More than 32,600 tests were completed in the last 24 hours, an increase from the noticeably low amount of 24,000 tests processed on Tuesday, which represented less than half of the province’s target for testing announced last month.

On Thursday, the number of tests still being processed was 29,332, down from more than 90,000 earlier this month.

“In actual fact, this isn't a backlog,” Elliot said. “This is what happens in the normal course of events with the 25,000 to 30,000 tests being what we normally see from day to day and they can be processed within the next day. We have caught up on any backlogs that we did have and so we do anticipate that people should receive the results within 24 to 48 hours. That's really important for so many people in terms of going back to work or someone who's being held at home because the school not allowing them to come back without a clean certificate.

Positivity rate was 2.41 per cent

The province’s positivity rate now stands at 2.41 per cent, down from 3.42 per cent recorded on Tuesday due in part to the drop in processed tests.

To date, there have been over 66,600 cases of the novel coronavirus in the province and 57,325 recoveries since late January.

Ontarians between the ages of 20 and 39 accounted for most of the new infections on Wednesday (348), followed by 217 people between the ages of 40 and 59. People between 60 and 79 years old represented 104 of the new infections and 94 new cases were from people 19 years old and younger. Twenty-nine people who are 80 years old and over also tested positive for the virus.

Meanwhile, hospitalizations have dropped across the province compared to a day ago.

According to public health officials, 260 people were hospitalized for the virus in the last 24 hours compared to 274 on Tuesday.

Seventy-one people are currently in an intensive care unit and of those patients 49 are breathing with the help of a ventilator.