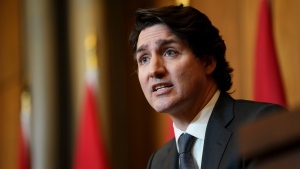 In an interview with The Canadian Press, he says he feels fine and has no symptoms.

He says he took another test this morning and it was negative, as was a previous rapid test.

He's not saying which of his three children has tested positive or how they're doing.

Trudeau revealed in a tweet Thursday that he was going into isolation for five days after finding out Wednesday evening he'd been in contact with someone, whom he didn't identify, who had tested positive.