Ontario to unveil plan for Stage 3 on Monday 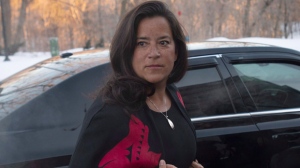 The Quebec engineering and construction giant has faced legal trouble over allegations it paid millions of dollars in bribes to get government business in Libya, which would be a crime under Canadian law.

As attorney general, Wilson-Raybould could have become involved in the case against the company by directing federal prosecutors to negotiate a “remediation agreement,” a way of holding an organization to account for wrongdoing without a formal finding of guilt.

The Globe and Mail newspaper reported Thursday that SNC-Lavalin repeatedly lobbied Trudeau's aides for a deal and that his office leaned on Wilson-Raybould to make it happen.

The federal director of public prosecutions told SNC-Lavalin in October that negotiating a remediation agreement would be inappropriate in this particular case. Months later, Wilson-Raybould was moved to the veterans affairs post in a January cabinet shuffle, and Montrealer David Lametti took over as attorney general and justice minister.

During a visit to Vaughan, Ont., on Thursday, Trudeau said the allegations in the newspaper story “are false.”

“Neither the current nor the previous attorney general was ever directed by me or anyone in my office to take a decision in this matter,” he said.

Asked whether he or his office had applied any influence or pressure on the minister, Trudeau repeated they had never directed Wilson-Raybould or Lametti to intervene.

Neither Wilson-Raybould nor SNC-Lavalin has responded to questions from The Canadian Press about the story.

Conservative Leader Andrew Scheer said the allegations suggest Trudeau demoted his attorney general for defying his orders, and he called on the prime minister to immediately reveal what he knew about the matter.

“Nothing short of full disclosure is acceptable. His carefully crafted and legally vetted answers today fall far short in this regard,” Scheer told reporters on Parliament Hill. “If he continues to fail to be transparent with Canadians, Conservatives will make every effort and explore every option to make sure Justin Trudeau and his office are held accountable.”

A senior government official with direct knowledge of the matter said a lawyer did not draft Trudeau's denial of impropriety, but noted Trudeau deliberately said the PMO did not direct the attorney general on the matter. The prime minister wanted to avoid leaving the impression that no one ever discussed the issue, given that SNC-Lavalin was heavily lobbying government officials, the source said.

At no point was there an attempt to influence Wilson-Raybould, added the source, who spoke on condition of anonymity because they were not authorized to discuss the file publicly.

In the extensive conversations with Lametti about his new job, the matter was never mentioned, the source added. During question period in the House of Commons, Lametti also denied engaging in discussions about SNC-Lavalin before his appointment.

Conservative and NDP members pressed the government for details of any conversations that may have taken place on the file in government circles, including between the Prime Minister's Office and the attorney general's office.

Lametti repeatedly said the Prime Minister's Office had not given directives to him or his predecessor on the matter, nor had he or Wilson-Raybould been pressed on the case.

Wilson-Raybould did not rise in the House to answer questions.

The attorney general can give the director of public prosecutions directives on general issues and on individual cases, provided the directives are in writing and published in the Canada Gazette, the federal register.

The fact that such directives must be done publicly would seem to constrain a justice minister from doing anything overtly political.

Analyst Yuri Lynk of Canaccord Genuity said the reputational damage of a looming corruption case could hurt SNC-Lavalin more than a ban on federal contract bidding for up to 10 years - one possible outcome of a conviction if the case heads to trial.

“In my mind, it's worse just to have this hanging over the company's head for another several years. It hurts their reputation,” he said. “Their competitors would always be reminding clients that you're dealing with someone with outstanding charges against it in its own country.”

- With a file from Christopher Reynolds