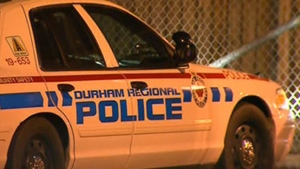 A 33-year-old motorcyclist has been charged after he allegedly fled from police during a traffic stop and assaulted an officer in Pickering.

Durham Regional Police say an officer in the area of Kingston and Glenanna roads spotted a motorcyclist driving without a licence plate at around 7 p.m. on June 2.C

According to police, the officer tried to stop the man but he sped away at a high rate of speed. The motorcyclist, police say, was seen “dangerously weaving in and out of lanes" and the officer did not continue to follow the man due to safety concerns.

A short time later, police say the officer saw the motorcyclist at the intersection of Kingston Road and Rougemount Drive. He blocked in motorcycle but police say the man “aggressively” spun his wheels and made contact with the cruiser.

Police say the man was ejected from the motorcycle and tried to flee the area on foot.

With the help of two members of the public, the officer was able to subdue the suspect, police say.

The motorcyclist, identified by police as 33-year-old Ryan Demelo, faces a number of charges, including assault with intent to resist arrest, flight from a police officer, dangerous operation of a motor-vehicle, driving while under suspension, and stunt driving.

Police are asking the two people who helped the officer subdue the suspect to contact Const. Elliott of West Division.

Anyone with additional information about the incident can call police or Crime Stoppers anonymously.