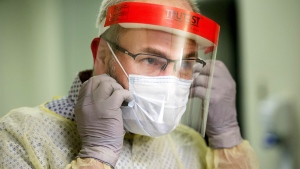 A man demonstrates how to put on a face mask and other protective clothing during a tour of a COVID-19 evaluation clinic in Montreal, Tuesday, March 10, 2020. (Graham Hughes/The Canadian Press)

The number of new COVID-19 infections in the province has once again surpassed 400 after a slight dip in new cases on Sunday.

Provincial health officials are reporting 425 new cases today, up from the 365 confirmed one day earlier.

This marks the highest daily case count recorded in the province since June 2.

The seven-day rolling average of new cases now stands at 351, up from 218 one week ago.

The number of active cases in Ontario also continues to climb. Ontario now has 3,299 active COVID-19 infections, up from 2,627 last week.

This is a significant increase compared to late July, when the province had fewer than 900 active cases of the novel coronavirus.

Two more deaths were reported today, including one patient at a long-term care facility, bringing the total number of centrally-confirmed virus-related deaths to 2,829. Local public health units indicate that number is actually 2,842.

After processing more than 40,000 tests on Sunday, a new record in the province, only 31,700 tests were completed over the past 24 hours.

That pushes the province's case positivity rate to 1.34 per cent, up from 0.91 per cent one day earlier.

On Monday, Ontario Health Minister Christine Elliott said again that the province is working to expand lab capacity and hopes to begin processing 50,000 tests per day in the next two weeks.

Infectious disease specialist Dr. Isaac Bogoch told CP24 on Monday morning that while testing has drastically improved in recent months, the spike in new cases is not simply a reflection of increased testing capacity.

"We are testing more and I think it is fair to say that those numbers are a much better reflection of what the ground truth is compared to many months ago when we were only doing about 5,000 tests per day... Having said that, the amount of testing is not the only feature accounting for those case numbers," he said.

Of the new cases reported today, 175 were from Toronto, 84 were from Peel Region, and 60 were from Ottawa.

This is the highest single-day tally reported in Toronto since May 30, when 184 new cases were confirmed in the city.

"While 75 per cent of our new cases... are in Ottawa, Peel and Toronto, there are other jurisdictions across the province that have been seeing an increase as well," Dr. Barbara Yaffe, Ontario's associate chief medical officer of health, said at a news conference on Monday afternoon.

She noted that there have been increases in other GTA municipalities as well as Waterloo Region.

"When we look more closely at the numbers to determine where these individuals are acquiring the virus, we have seen a few trends emerge. Social events remain an issue. Weddings, house parties and so on contribute to our case numbers," she said.

She added that the province has also seen a rise in workplace infections.

"This does include some in restaurants and bars, although the infection has tended to circulate more often between the staff in the workplace rather than the patrons. We are finding that in some cases work colleagues assume they are in each other’s social circle because they work together, therefore making it safe to interact without physical distancing or wearing a mask. This is absolutely not true."

She added that as cases climb in the community, it is "no suprise" that there has been an uptick in cases in congregate settings, including schools.

Eighteen new cases in Ontario schools were recorded today, bringing the total number of school-related cases in the province to 90.

"Three schools have declared outbreaks and two of them have been closed," Yaffe said.

She added that COVID-19 cases have been reported in about 75 of the province's 5,000 schools.

The province says according to the data it has access to, 65 patients with COVID-19 are currently receiving treatment at Ontario hospitals with 22 of those patients in intensive care.

Officials note that about 35 hospitals did not submit data to the province over the weekend and the number of hospitalized patients will likely increase when "compliance increases."

According to data from individual hospitals and local public health units, the number of patients infected with COVID-19 that are hospitalized in Ontario is actually 90, up from 84 on Sunday and 73 on Saturday.

Back in June, the last time active cases were this high in the province, virus-related hospitalizations exceeded 500.

Officials confirmed Monday that of the recent cases, 51 per cent are in the 20 to 39 age group.

"We know 20 to 30-year-olds just don't get that sick. Some of them do but most people don't. Most people will have a mild course of illness and recover. What we also know is this is a very contagious infection and it doesn't take a lot of time for this to spread into other age groups," Bogoch said.

"We are already starting to see earlier indications that it is spreading into other age groups. It also doesn't stay in a single geographic location for long. I mean now we are hearing about Toronto, Peel, and Ottawa, but if we don't do anything it will spread to other geographic locations."

Bogoch said if Ontario stays on the current course, the number of hospitalizations, intensive care admissions, and deaths will rise.

On Monday, the premier and the health minister said they intend to release the province's fall preparedness plan this week.

"This is a very comprehensive plan," Elliott said. "This is going to be brought forward over several days because there are many elements to each section of the plan."

A man demonstrates how to put on a face mask and other protective clothing during a tour of a COVID-19 evaluation clinic in Montreal, Tuesday, March 10, 2020. (Graham Hughes/The Canadian Press)