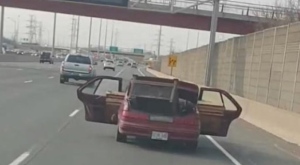 Police have laid charges against a Hamilton man who police allege was spotted driving down the QEW with metal sticking out of the car's open rear doors. (Twitter/ OPP Sgt. Kerry Schmidt)

Police say a viral video of a car driving down a busy GTA highway with its doors wide open helped investigators identify two suspects wanted in connection with a break-in at a Hamilton business.

According to police, at around 6 a.m. on April 13, an older-style burgundy sedan was caught on camera parked at the gates of a commercial business on Brockly Drive in Hamilton. A male and female were spotted driving inside the compound, prying open the gate, and stealing about 1,000 pounds of bulk steel, which is worth an estimated $3,000.

A little more than a week later on April 22, the same vehicle was spotted at the business. Police say the same suspects tried to enter the compound but their second attempt was unsuccessful.

Members of the Hamilton Police Service launched an investigation into the incidents and on May 7, officers got wind of a viral video showing a red Chevrolet Lumina driving down the Queen Elizabeth Way with its rear doors open and trunk wide open.

The car appeared to have metal sticking out of the open doors.

Officers were able to link the car in the video to the break-in and attempted break-in at the Hamilton business in April.

On May 9, officers seized a 1991 red Chevrolet Lumina at an address on Bow Valley Drive in Hamilton and a 42-year-old man and 42-year-old woman were arrested at the scene.

Nicole Farr and Christoper Cielecki, of Hamilton, have been charged with breaking and entering.

"What an absurd video with the doors wide open, cargo sticking out of it," OPP Sgt. Kerry Schmidt told CP24 on Friday.

He says the pair will also be facing Highway Traffic Act charges.

Police are asking anyone with video footage that could assist in the investigation to contact Hamilton police or Crime Stoppers anonymously.

Police have laid charges against a Hamilton man who police allege was spotted driving down the QEW with metal sticking out of the car's open rear doors. (Twitter/ OPP Sgt. Kerry Schmidt)