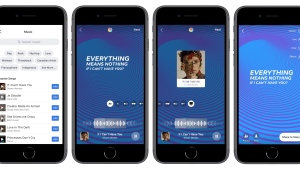 A new in app music component on Facebook stories is seen on phones in this handout photo. It's been a long time coming, but music features are finally being enabled on Facebook and Instagram in Canada. THE CANADIAN PRESS/HO, Facebook *MANDATORY CREDIT*

TORONTO - It's been a long time coming, but Facebook and Instagram users in Canada can finally incorporate music clips into their story posts.

Facebook says it's enabling an array of creative music tools, among them the ability for users to post 15-second snippets of songs with their stories.

The feature arrives in Canada nearly two years after it began rolling out in the United States and Europe. In the past, whenever an international user posted a music sample through Instagram, it would be muted for Canadian audiences.

Facebook says the Canadian rollout comes after it reached new licensing agreements over rights with Canadian music publishing societies and organizations, as well as domestic labels and distributors.

Among the other new widgets are “music stickers,” which use visual icons, such as album covers, to activate songs on Instagram Stories.

Users can now also post song lyrics that display across a video similar to a karaoke clip, as well as “music question” stickers where friends can respond to a question with a link to songs of their choice.

Sharing music through Instagram and Facebook has become an integral part of growing buzz around new musicians.

“We've seen artists and songwriters reach new audiences, build their brands, and connect and engage deeply with fans through our products,” Facebook said in its announcement.

Facebook says the addition of music features will also allow users pin songs to the top of their Facebook profiles. When a friend clicks on the track it will play as a clip through Facebook, or allow them to pull up their favourite streaming platform to hear the entire song.