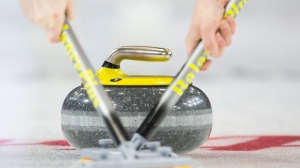 Curlers sweep a rock during in Brandon, Man., on March 5, 2019. The fields are slowly filling up for the upcoming national curling championships, providing a beacon of sporting light in a dreary season for competitive players.THE CANADIAN PRESS/Jonathan Hayward

Curling Canada is expanding the field for the Scotties Tournament of Hearts and Tim Hortons Brier.

The usual 16-team field will have two extra wild-card teams when play begins next month in the so-called bubble at Calgary's Markin MacPhail Centre.

The play-in game was cancelled so there will be three wild-card teams in all, along with the defending champions and 14 provincial representatives for each competition.

The federation says that several high-performance teams were denied the opportunity to qualify this season since several associations cancelled their playdowns due to the COVID-19 pandemic.

The final rankings from last season will be used to determine the two teams that would have played in the wild-card game. Instead they will get automatic entry in the main draw.

A third wild-card entry - bringing the field to 18 - will be granted entry on criteria “to be determined,” which would allow for a balanced draw featuring two pools of nine teams.