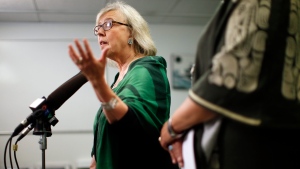 Green Party Leader Elizabeth May speaks during a press conference at the campaign office of candidate Racelle Kooy while in Victoria, Wednesday, Oct. 16, 2019. THE CANADIAN PRESS/Chad Hipolito

"It's time to look at the web of trade deals and investor-state agreements that have operated, and in my view operated illegally, against the way the General Agreement on Tariffs and Trade was initially negotiated," May said Friday.

"Those rights of trans-national corporations, of big oil, have superseded our ability to negotiate treaties that actually work to protect our climate."

The party is particularly critical of investor-state agreements, which can include a dispute settlement mechanism that allows charges to be brought against a country hosting an investment by another country or investor.

Paul Manly, the Green candidate running for re-election in Nanaimo-Ladysmith, said the mechanisms "give foreign multinationals the ability to seek financial compensation when the decisions of democratically elected governments get in the way of their profits."

May acknowledged that renegotiating existing trade agreements will take time and co-operation.

"We need to get back to that and make sure we protect climate agreements like the Paris agreement, which currently has no enforcement mechanisms," she added.

"Because the trade ministers in every country are more powerful than the environment ministers, and it sabotages our efforts."

The party said Friday that restructuring would include reducing the distances over which food is shipped by increasing domestic and local food production.

It would also ensure that products that are banned in Canada, such as bovine growth hormone in milk products, are not imported in food from other countries.

The Greens also promise to improve internal trade between provinces.

May, campaigning on Vancouver Island for a second straight day, was scheduled to make an announcement on the Greens' affordability plans later in the Greater Victoria municipality of Saanich.