'I was shot for being a TTC employee': woman shot with BB gun calls for action 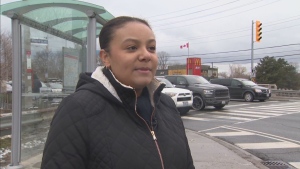 Alexandra Stoeckle, a TTC bus operator, speaks to CTV News Toronto for the first time after being shot with a BB gun.

Alexandra Stoeckle thought Saturday was going to be a typical day at work.

The 24-year-old TTC operator was waiting for the bus she was taking over to begin her shift when something hit her in the chest.

"I thought maybe, you know, we're so close to the road, I thought maybe the cars were kind of kicking up some dirt or it had started raining, but I didn't see what had hit me," she said.

When Stoeckle looked up to check, she felt something hit her forehead, followed by a painful stinging feeling.

"Obviously, your human reaction is to cover your face when that happens. And once it stopped, and I looked back over, it was just teenagers in their car. They shouted some profanities at me and the TTC and drove away," she said.

"F--- you, TTC," was what they shouted, Stoeckle told CTV News Toronto in an interview on Tuesday. The TTC bus driver was back at the scene of the assault in the area of Markham Road and Progress Avenue, speaking out for the first time about what unfolded on the evening of Jan. 21.

Toronto police said an unknown number of suspects, believed to be in their teens, shot Stoeckle with a BB gun and fled in a vehicle. No arrests have been made.

Stoeckle recounted checking her head after she was shot, expecting to find a gaping hole.

"I just kept patting my face, and once I realized there's no blood, there's nothing there -- after I kind of realized okay, at least it wasn't bullets -- that's when it hit that I was just shot for being a TTC employee," she said.

"It was pretty shocking because … kids do things that kids do, but it's not usually women that are their victims."

Stoeckle remembered she was a bit hesitant to report the incident to authorities, thinking, "why bother?" when the suspects had already fled. But she decided to make the call.

"Having been here for 16 months, having a dad who's been here 36 years, I know it happens more often than it should," she said.

The next call she made was to her father. That's when she said the gravity of what occurred hit her, and she began crying as she spoke to him.

"I really don't wish they would have to make that phone call. That's when it really hits you that ... if it was real bullets, I wouldn't have made that call, and someone would have called the ambulance, but it would have been too late from where I got hit," Stoeckle said.

While she did not get any sleep following the incident, Stoeckle said she feels okay now.

"That's a sign of how normalized it's become that I'm just so used to it at this point that I'm not really panicked," she said. "I feel calm. I don't feel scared."

The incident has prompted Stoeckle to write an open letter to Toronto Mayor John Tory and TTC CEO Rick Leary, calling for action.

In the letter, Stoeckle provided a timeline of what happened to her. She wrote how she and many of her colleagues feel that the transit system has become "more and more unsafe."

"These are not one-off incidents, these are targeted attacks. Employees and passengers alike are unsafe when riding, driving and waiting for the TTC," Stoeckle wrote.

She is requesting a committee that not only consists of city officials, police and union leaders but also of TTC employees be created to address the recent incidents.

"The TTC operators are the ones who see what is happening every day. We are the face of the company and we are also the eyes," she wrote.

This is not the first time she is voicing her concerns. She said she previously wrote to officials back in August about safety and what it is like for a worker of colour.

Stoeckle said she did not receive a reply back then, but officials have responded to her this time.

"Unfortunately, they waited for something to happen. And maybe if they had listened to me back in August, I wouldn't have been in that position," she said.

"Because of that, it makes me angry. It really does."

Stoeckle added that the violent incidents on the TTC that have put employees and passengers in danger should be stopped.

On Monday, two TTC operators were attacked in Scarborough by a group of teenagers in what police were calling a "despicable swarming" style assault.

"We don't deserve that," she said. "There has to be change. And people need to remember we are human beings, we have families, and we are people before we are TTC employees."

A spokesperson for Tory's office confirmed in a statement that he received the letter and had a good phone conversation with Stoeckle.

"The Mayor has been clear: We have to put an end to these acts of violence and disrespect against transit workers. That’s why earlier this month, Mayor Tory announced the City’s proposed budget would invest millions more in transit safety," the spokesperson said.

As for what she plans to do next, Stoeckle said she intends to stay on the job, planning to return to work on Friday and continue advocating for safety.

"I think it's not right to run away when something happens and whatever the outcome is of my discussions with Rick Leary and everyone else, I want my voice to be heard and I want to make a change."

Meanwhile, Stoeckle’s father, Mark, released a statement Tuesday evening, offering a $5,000 reward to anyone who can help police find the person who fired the BB gun.

“I love my daughter," he said. "Someone who knows who this individual is must love to have $5000 cash. Call Crime Stoppers and receive a reward.”

Alexandra Stoeckle, a TTC bus operator, speaks to CTV News Toronto for the first time after being shot with a BB gun.