Inquiry into Toronto police’s use of force during encampment clearings is ‘inappropriate:’ Tory 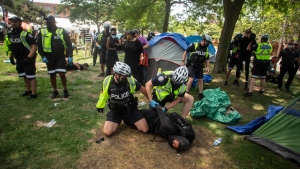 Toronto police detain encampment supporters as they clear the Lamport Stadium Park encampment in Toronto on Wednesday July 21, 2021. The operation came a day after a different encampment was cleared at a downtown park. The city has cited the risk of fires and the need to make parks accessible to everyone as factors behind the clearings. THE CANADIAN PRESS/Chris Young

Mayor John Tory says an inquiry into the Toronto police’s actions in clearing out homeless encampments at city parks this summer would be “wholly inappropriate.”

Tory made the comments Friday morning ahead of a city council meeting where councillors Josh Matlow and Mike Layton will be presenting a motion for an inquiry into the police’s role in the clearings, which resulted in some violent scuffles between officers and advocates, and many arrests.

“I think the traditional inquiry is an entirely inappropriate thing to do here. It suggests some wrongdoing on the part of our public servants who work so hard, including the police by the way,” Tory told CP24.

Tory called the motion a “publicity stunt” by the councillors that could cost millions of dollars.

“... I don't think it advances anything one inch, doesn't get anybody a housing unit any faster, it doesn't help anybody with anything, it's just a publicity stunt and some people wish to spend their time doing that,” he said.

The councillors argue that the inquiry is needed to investigate the police’s use of force and violence against unhoused people and their advocates during the clearnings, and the decision to ban and arrest journalists from covering the clearings.

They say the inquiry could also provide recommendations to ensure a human rights approach is prioritized when engaging with encampment residents and other unhoused people.

“Toronto’s encampment clearings were violent, inhumane & ineffective as they simply pushed vulnerable people from one park into another, or a lane or under a bridge. At City Council, we’re requesting a Judicial Inquiry so this approach is never taken again,” Matlow tweeted last week.

The councillors' motion comes after Toronto’s ombudsman announced earlier this week that he will be conducting an investigation into how the city handled clearing the homeless encampments.

However, the ombudsman will not review the conduct of the police as this is beyond the mandate of Ombudsman Toronto.

“An Ombudsman investigation is welcome, but the bigger issue here is violence in enforcement of trespass orders that was witnessed by many and shared around the world. Everyone involved needs to be held accountable,” Layton tweeted earlier this week.

Toronto’s encampment clearings were violent, inhumane & ineffective as they simply pushed vulnerable people from one park into another, or a lane or under a bridge. At City Council, we’re requesting a Judicial Inquiry so this approach is never taken again. https://t.co/xlHeEMeM04