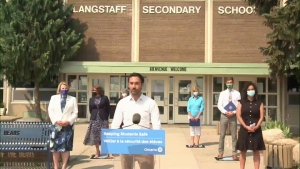 TORONTO - Ontario is making it mandatory for all school boards to develop a strategy to combat human trafficking by the beginning of next year.

The province said Tuesday that it will spend $2.4 million to support necessary training and resources for the move, which will help schools identify, respond to and prevent trafficking of children.

“We need to do a better job of protecting our most vulnerable because the sad reality is the trafficking impacts our children and students the most,” he said. “No child deserves to feel unsafe in their schools or in their communities.”

The province released a new policy framework on Tuesday that it said would help boards build and implement their anti-trafficking strategies.

The strategies will need to support at-risk students or those being trafficked, train educators to identify or spot early warning signs of trafficking in youth and help raise awareness about sex trafficking in the province, the government said.

It added that school boards will work with police and community groups to develop their strategies, which the government wants in place by January 2022.

Casandra Diamond, the founder of anti-human trafficking organisation BridgeNorth, said the school strategies will be valuable because they will train educators to spot warning signs and better safeguard students.

“This day is monumental â€¦ in the sense that we are turning the tide from enforcement,” said Diamond, who was a former victim of sex trafficking.

“I went to our schools, I shopped in our malls, and I ate in our restaurants, but nobody could see what was happening. I couldn't reach out. Someone would have had to reach in.”