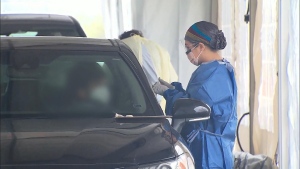 Ontario is reporting more than 300 new cases of COVID-19 for the second time in the last three days, marking the continuation of a steady upward trend that has now seen infection levels return to where they were in June.

The Ministry of Health says that there were 315 new cases of the disease caused by the novel coronavirus confirmed over the last 24 hours, up from 251 one day prior.

It is the highest daily count since June 6 when 387 new cases were reported and marks the second time this week that new cases have surged past the 300 threshold.

The seven-day rolling average of new cases now stands at 243 after dropping to as low as 85 last month.

Nearly two-thirds of all the new cases reported on Wednesday were in the Greater Toronto Area, continuing a recent trend.

The data, however, suggests that the virus may be starting to spread to regions within the GTA which had previously seen lower levels of infection.

On Wednesday, there were 77 new cases in Toronto and 54 new cases in Peel Region but York Region and Durham Region were not far behind with 37 and 24 cases respectively. Both areas had been seeing daily counts in the single digits as recently as late August.

Ottawa also continues to be a hotspot of infection, adding an additional 61 cases over the last 24 hours.

“I don’t think we know right now what the numbers are going to be next week. It is difficult to predict but what I can say is that we have seen an increase in numbers and that is very disappointing and frankly distressing,” Chief Coroner Dirk Huyer, who is coordinating the province’s outbreak response, told reporters during a briefing at Queen’s Park on Wednesday afternoon. “This is an opportunity to rethink and refocus on those things that we need to do together, all of us, to be able to reduce the chance of infection, reduce the chance of spread and reduce the chance of continuing along the pathway of increasing numbers.”

Positive rate remains above one percent

At one point in early August the province went an entire week with its daily counts in the double digits but the numbers have steadily ticked up since then and sources now tell CTV News Toronto that the Ford government is considering rolling back the limits on allowable gatherings in the hardest hit regions of the province.

The latest data released on Wednesday points to a positivity rate of 1.1 per cent on 28,761 tests.

It is a far cry from the 17 per cent rate recorded in early April as the province struggled to ramp up its testing capacity but is still substantially higher than the portion of tests that were positive in early August – around 0.3 per cent.

The number of active cases across Ontario also continues to rise after dipping below 1,000 for the first time in months in August.

The spike in cases comes as the province struggles to handle an increase in demand for COVID-19 tests that has accompanied the return of students to public school classrooms.

Over the last week there have been long lineups at most of the assessment centres in the GTA with some people lining up for upwards of three hours and others reporting being turned away entirely.

Premier Doug Ford has called the lineups “ridiculous” and has hinted that pharmacies could be used to test some asymptomatic people, though no formal announcement has been made yet.

“This is obviously a problem,” infectious disease specialist Dr. Isaac Bogoch told CP24 during an interview earlier on Wednesday. “We have seen this coast to coast with long lineups and long waits and quite frankly it is not acceptable. People have jobs and lives and this might impact whether people even choose to get a diagnostic test done.”