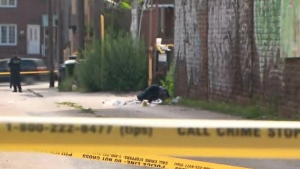 Two men have been charged with second-degree murder after a 22-year-old man was stabbed to death west of downtown Toronto early on Sunday morning.

Toronto police say they were called to Baden Street and Lakeview Avenue, north of Dundas Street West and Ossington Avenue, at 3:31 a.m. Sunday after a witness called 911 to report a disturbance.

Det. Trevor Grieve said they arrived to find a man suffering from a single stab wound.

Firefighters and paramedics performed CPR on him at the scene.

He was rushed to a hospital trauma centre where he was pronounced dead.

On Monday, investigators identified the victim as Remi Almeida of Toronto.

Police said that later on Sunday they arrested two men in connection with Almeida's death.

Eric Medeiros, 21, and Jose Pereira de Medeiros, 48, were both charged with second-degree murder.

Both men appeared in court at Old City Hall on Monday morning.

Anyone with information about this incident is asked to call homicide detectives at 416-808-7400.