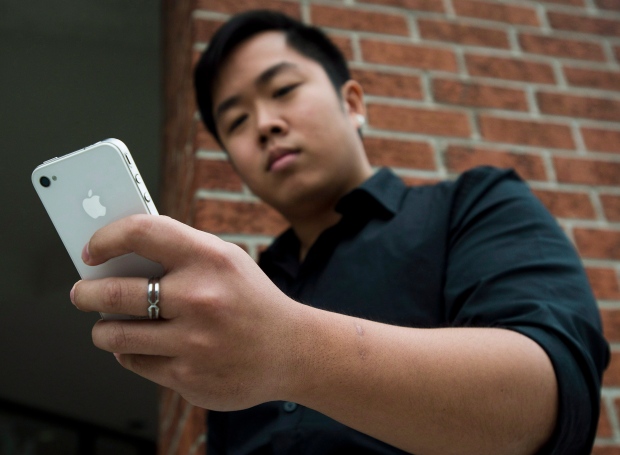 A man uses his smartphone in Toronto. (The Canadian Press/Nathan Denette)

According to recently released figures, 51 per cent of the Canadian Internet traffic that comScore tracked was linked to a phone or tablet, while 49 per cent was tied to a computer.

Mobile web usage is expected to grow more in 2015 than the time spent online with computers, a trend that has already been seen in other countries, says comScore Canada president Brent Bernie.

"The U.S. is at 61 per cent mobile and I expect Canada will continue to move (in that direction)," Bernie says.

"My guess -- and I'm not great at crystal-balling things -- my call would be we'll get to two-thirds of usage being mobile. How long that takes? A year, a year-and-a-half maybe?"

When comScore expanded its Canadian tracking methods last year to include mobile traffic it found the time Canadians spent online had pretty much doubled compared to previous estimates.

The average amount of time Canadians spent online shot up to nearly 75 hours a month, or about 2.5 hours a day.

Canadians in the 25-to-34 demographic were seen to be spending the most time online, averaging around 110 hours a month across various devices.

Many Canadians would be shocked to learn how much time they actually spend online, Bernie says. Mobile users who habitually take a quick peek at their smartphone may not realize those short interactions are adding up to hours.

"Because these devices add so much convenience to people's lives and they can go on them and off them (easily) they're filling time they normally would've been doing other things," says Bernie.

"People are filling what might've been spare time before (thinking), 'Oh, I'm going to check this out' or 'Oh, let me check out that thing I saw last night and see if I can find that website."'

About five per cent of Canadian Internet users are now mobile-only consumers, comScore says, meaning they almost never use a desktop or laptop computer to go online anymore and strictly access the Internet with smartphones and tablets.

On mobile devices, comScore says over 80 per cent of the time Canadians spend online is with an app versus using a web browser.

"Apps are the dominant portion of people's time on mobile and we see the same thing in the U.S.," Bernie says.

He expects time spent online will only increase as more and more devices add online connectivity.

"As we go forward -- gaming consoles, wearables, cars, all those things -- it just expands exponentially the places people can consume (the Internet)."