‘I will be like an 800-pound gorilla on their backs,’ Ford says as province continues to struggle with testing 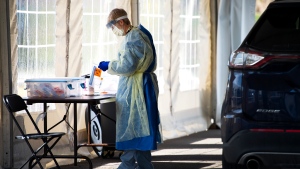 Health care workers do testing at a drive-thru COVID-19 assessment centre at the Etobicoke General Hospital in Toronto on Tuesday, April 7, 2020. THE CANADIAN PRESS/Nathan Denette

Ontario has reported another 413 new cases of COVID-19, which marks a continuation of a worrisome upward trend.

It is an increase from the 390 new cases confirmed on Wednesday and represents the second highest number of new cases reported in any 24-hour period in nearly two weeks.

So far this week Ontario has seen its rolling five-day average of new cases steadily increase just as the economy partially reopens with the beginning of Phase One of the government’s reopening plan.

Dr. David Williams, Ontario's chief medical officer of health, said the province's case growth appears to be "at a plateau."

"That is disappointing and we are trying to get a sense of why," Williams said during his daily news conference on Thursday afternoon.

He suggested that the increases could be from leftover tests recently processed after widespread testing at long-term care homes across Ontario.

"Let’s see if that does evidence out over the next few days," Williams said.

The rise in cases also comes amid what Premier Doug Ford has conceded has been a “shocking” drop off in testing.

It also points to an alarming rise in the positivity rate, which at one point had dipped below the two per cent threshold but surpassed seven per cent earlier this week and now stands at just under four per cent.

“Am I frustrated? Yeah I am frustrated but I have confidence in the team. I will be like an 800-pound gorilla on their backs every single day if I have to until I see these numbers go up,” Ford said during a press conference at Queen’s Park on Wednesday.

Ford said if the number of new cases of COVID-19 continue to rise he “won’t hesitate” to reintroduce some of the restrictions that have been lifted as part of the first phase of Ontario’s reopening plan.

In the meantime, he said that he is pushing Ontario’s health officials as hard as he can to ramp up testing, particularly among groups of people that may be at higher risk of contracting the virus.

“I want to see truckers tested, I want so see taxi drivers tested, I want to make sure that long term care (gets regularly tested). We can’t just test everyone and walk away. I want to go into the automotive sector and start testing people right across the province. I want to see (workers at) food processing plants being tested,” he said. “As sure as I am standing here we are going to be ramping it up.”

While the number of new cases of COVID-19 remain stubbornly high, there is at least some indication that deaths from the virus have peaked.

The Ministry of Health is reporting another 31 deaths in people who have contracted COVID-19 over the last 24 hours. That is up from the recent low of 15 deaths reported on Tuesday but remains well off some of the numbers the province was seeing in late April when the number of new fatalities each day was often in the 80s.

A count of Ontario’s 34 public health units as of 10:30 a.m. shows that there have now been 2,048 deaths attributed to COVID-19 provincewide.

On Wednesday, there were 984 COVID-19 patients in Ontario hospitals with 155 of those people being treated in intensive care units.

The latter number peaked at 264 in early April and has been steadily declining since then.

It should be noted that while more than three-quarters of Ontario’s 24,187 confirmed cases of COVID-19 are now classified as recovered, though there is now more people contracting the virus than recovering from it on a daily basis.

The latest data suggests that an additional 319 cases were moved over from active to recovered on Wednesday but that was outpaced by the 413 new cases confirmed by the province’s laboratories.

Speaking with reporters on Thursday, Health Minister Christine Elliott said that it is “still too soon” to say whether the recent rise in cases is a result of the reopening of much of Ontario’s retail sector earlier this week.

She said that officials still believe the province is in the midst of a “downward trend” that has been felt since a record 640 cases were reported back on April 25 but will be prepared to act should cases continue to rise.

“It is not like it (the number of new cases) will all of a sudden take a dive and it will be down to 200. It is going to be a slow, incremental path and all things considered (Chief Medical Officer of Health) Dr. (David) Williams is of the view that is where we are heading and we are taking our cues from him,” she said. “But we will be watching this very closely as we get into next week and we really start to see what the effect is on public health from the changes that have happened as a result of stage one. Then we will really see what is happening out there and that will influence where we go from there.”