Ontario officials insist that 'made in-house' vaccine certificate app will be ready by Oct. 22 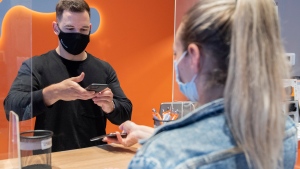 Ontario officials continue to insist that an app for COVID-19 vaccine certification is “on track” to be released on Oct. 22, even as some tech experts cast doubt on the Ford government’s ability to build the program in-house in a matter of weeks.

The Ford government has opted to have the Ontario Digital Service build the app itself rather than hiring a private sector company to do so, as has been the case in other provinces.

The somewhat novel approach has led some to question whether the app can be ready in just six weeks, including opposition parties at Queen’s Park who have called on the Ford government to adopt Quebec’s existing system.

But during a press conference on Tuesday, Associate Minister of Digital Government Kaleed Rasheed stressed that both the enhanced vaccine certificate featuring a QR code and the app that will be used by businesses to read the codes are still “on track” to be released by Oct. 22.

He said that the app will be open-sourced, allowing for it to be “continuously improved” once it is in use.

“We have some of the most talented developers and designers in Ontario working on this app,” he said. “My team at the Ontario Digital Service is building the app in-house, taking advice from the private sector, and other jurisdictions to help us get this right, to protect your data and privacy from the start.”

Ontario’s vaccine certificate program actually takes effect on Sept. 22 but for the first month businesses will have to review printed vaccine receipts downloaded from a Ministry of Health website and cross reference them with photo ID.

The temporary workaround is necessary to give the province enough time to develop the app after months of insisting that a vaccine certificate program would not be necessary in Ontario.

During Tuesday’s press conference, Rasheed was asked whether Ontario civil servants are working with any technology companies in developing the app but did not directly answer the question, only saying that the government is consulting with businesses “small, medium and large” because “at the end of the day those businesses are the ones who will be using the app.”

But at a separate press conference at Queen’s Park, NDP Leader Andrea Horwath slammed the government for “waiting far too long to put something in place.”

“They have dragged their feet all the way along and the people that end up holding the bag are the businesses that expected to, without any resources or any real supports, pull off the government’s job,” she said.

Rasheed said that the new system will be linked with the provincial COVAX database and that businesses will simply see a “checkmark or an X” when they scan the QR code.

Information about legitimate medical exemptions will also be “embedded” in the system, he said.

That means that business will no longer have to review doctor’s notes once the app is released.

“We want to release a product at the end of the day that is going to help these businesses continue to operate,” Rasheed said.