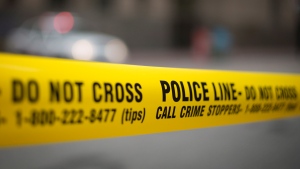 A 33-year-old man is dead after a stabbing in downtown Hamilton early Saturday morning.

Police tell CP24 that the victim was found on the street on East Avenue near King Street at around 2:30 a.m. He was rushed to hospital in life-threatening condition; however police confirmed on Saturday afternoon that he later succumbed to his injuries.

A homicide investigation is currently underway.

Initial reports from the scene suggested that the victim had sustained multiple stab wounds and was unconscious at the scene, though those details have not been confirmed.

Tactical and K9 officers were seen in the area following the stabbing.

Investigators say three suspects were seen running northbound on East Avenue and then west through Beemer Park after the incident.