Being out in public is stressful in pandemic era, new survey suggests 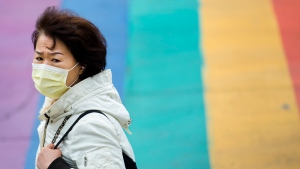 A women wearing a mask crosses the street during the COVID-19 pandemic in Toronto on Tuesday, April 28, 2020. THE CANADIAN PRESS/Nathan Denette

OTTAWA -- As restrictions to prevent the spread of COVID-19 persist, a new survey suggests more than half of Canadians find it stressful to venture out in public.

In a web survey conducted by polling firm Leger and the Association for Canadian Studies, 57 per cent of respondents said leaving their home for a public space caused anxiety.

While the figures were relatively consistent across the country, they reached a high of 64 per cent in Ontario and a low of 48 per cent in Alberta.

In comparison, 64 per cent of American respondents said they found it somewhat or very stressful to go out in public during the pandemic.

The survey was conducted May 8 to 11 among 1,526 Canadians and 1,004 Americans, 18 or older, who were randomly recruited from an online panel.

Since polls created from Internet panels are not random samples, however, the survey can't be assigned a margin of error.

The polling firm says that using data from the 2016 census, results were weighted according to age, gender, mother tongue, region, level of education and presence of children in the household in order to ensure a representative sample of the population.

Forty-three per cent of Canadians who took part found going out in public somewhat stressful while 13 per cent considered it very stressful. The figures do not correspond to the sum of 57 per cent due to rounding.

Ten per cent of men who responded found going out very stressful, compared with 17 per cent of women.

The vast majority of Canadians who took part said they were following advice to help contain the spread of the novel coronavirus by maintaining a safe distance of two metres from others, washing their hands more often, coughing or sneezing into their elbow and going out only for necessities.

In addition, 42 per cent of Canadians surveyed said they wore a protective mask when they did head out to public areas in the last week.

Fifty-one per cent said people outside their family had gotten within two metres of them over the last seven days.

The vigilance needed to maintain one's personal space in public is likely a factor in the stress people are feeling, said Leger executive vice-president Christian Bourque.

"Every time I go out grocery shopping, which I do because it's a necessity, somebody wants to pick the same avocados I'm looking at," he said. "There's always somebody in your bubble at some point, even though we try to do our best."

Asked how long it would take for the economy in their province to start getting back to normal, with commercial activity and jobs being created at a level before the pandemic hit, 14 per cent said about six to eight months from now, 24 per cent about a year and 30 per cent one to two years.

A women wearing a mask crosses the street during the COVID-19 pandemic in Toronto on Tuesday, April 28, 2020. THE CANADIAN PRESS/Nathan Denette