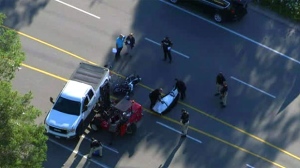 A motorcyclist is dead after a crash in East Gwillimbury.

York Regional Police are appealing for witnesses after a collision in East Gwillimbury left one person dead.

It happened at the intersection of Bathurst Street and Graham Sideroad at around 3:50 p.m.

The motorcyclist was pronounced dead at the scene, while the driver of the pickup truck was taken to hospital with minor injuries, police said.

Police said there is no indication as to the cause of the collision so far and the Major Collision Bureau is investigating.

Investigators are asking anyone who was in the area at the time of the collision or anyone who might have dashcam footage from the area to come forward to police.

The motorcyclist has not yet been identified as police are still trying to notify next-of-kin.

The intersection was closed for several hours following the crash but it has since reopened.