One person critical after two-vehicle crash in Mississauga 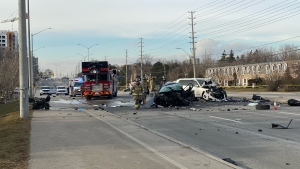 Emergency crews arrive on scene of a collision in Mississauga that left one male with life-threatening injuries. (CP24/Tom Podolec)

A male crash victim is fighting for his life in hospital following a collision in Mississauga Monday.

The two-vehicle crash happened near Dixie Road and Winding Trail at around 2:45 p.m.

Police said a male victim suffered critical injuries and was rushed to a trauma centre for treatment.

A short time later, police said he died of his injuries. However about an hour after that, police issued a correction to say that he had regained a pulse and remains in hospital in critical condition.

“When we arrived, one of the males in one of the vehicles had to be extricated,” Const. Heather Cannon told CP24. “He was en route to a trauma center via ambulance when his vitals went absent so they had to redirect the ambulance to another hospital. Staff there were working on him and they were able to revive him so he's still in critical, life-threatening condition.”

It’s not yet clear what led to the collision.

The driver of the other vehicle remained at the scene and did not sustain any serious injuries.

The Major Collision Bureau is now investigating. Police are asking any witnesses, or anyone with dashcam or surveillance footage from the area to contact investigators.

Dixie Road is closed in both directions between Burnhamthorpe Road East and Winding Trail.

Police are asking drivers to avoid the area. 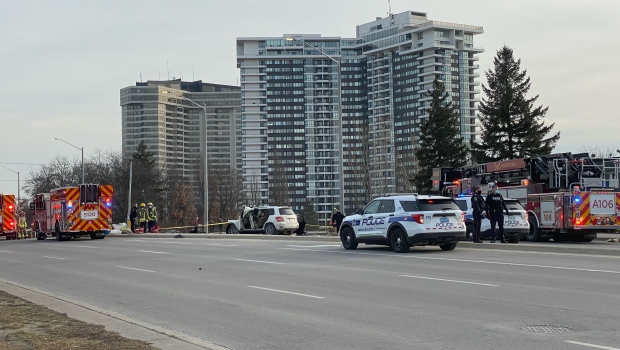 Emergency crews arrive on scene of a collision in Mississauga that left one male with life-threatening injuries. (CP24/Tom Podolec)