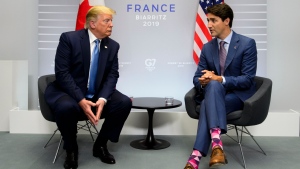 BIARRITZ, France - Justin Trudeau met face-to-face with U.S. President Donald Trump today on the margins of the G7 summit in France, where the two were expected to discus trade and economic issues amid rising concerns about a possible global recession.

Speaking to reporters before beginning their bilateral chat the two leaders talked about their shared commitment to seeing the new North American trade deal enacted.

“There's a lot of people wanting to make trade deals with each other and we have a deal that we were able to negotiate that is good for our workers, our citizens, good for the middle class,” Trudeau said.

So far only Mexico's government has officially signed off on the accord.

But Trump insisted the deal he has dubbed the U.S. Mexico Canada Trade Agreement, or USMCA, has broad support in the United States and he is optimistic it will get the seal of approval from Congress.

The Trudeau government has been waiting to see how the trade deal is dealt with by Washington before introducing it in Parliament.

Canadian officials have also said they expected Trudeau to again raise with Trump the issue of the two Canadians detained by China in apparent retaliation for the arrest in Vancouver late last year of Huawei executive Meng Wanzhou at the request of the Americans.

The G7 leaders began their summit meetings this morning with a working session that focused on the economy and security issues.

A Canadian official said Trudeau stressed his support for free and fair trade and for efforts to reform the World Trade Organization (WTO).

During the photo-op with Trump and Trudeau, the U.S. president shared a harsh assessment of the WTO, saying he believes it is even worse than NAFTA, which he again said was the “worst trade agreement ever done.”

Trump, meanwhile, has tried to downplay concerns the meetings of the Group of Seven leaders will be tense today, saying in a tweet this morning that the leaders are all “getting along very well,” and taking issue with some media reports indicating otherwise.