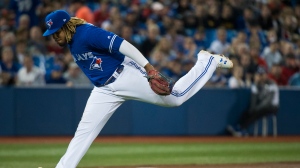 TORONTO -- Some help has finally arrived for the injury-plagued Toronto Blue Jays rotation.

However, it wasn't enough to stop the powerful Boston offence during a Thursday matinee at Rogers Centre.

Starter Clayton Richard reached his goal of throwing four solid innings in his Blue Jays debut, one of the few positives from an 8-2 loss to the Red Sox.

"I really feel good about this game just because of that," said Toronto manager Charlie Montoyo. "He was really good. His four innings were good, he threw strikes, his ball had movement on it. He was really good.

"So that's a good sign for us. I'm really happy about his outing."

The Toronto bullpen struggled after Richard's departure as Boston scored at least once in each of the last four frames. Former Blue Jays outfielder Steve Pearce homered and had three of Boston's 15 hits.

Justin Smoak homered and Brandon Drury had two hits for the Blue Jays (20-30), who have dropped eight of their last 10 home games.

Richard was reinstated from the injured list before the game. He was acquired last December from San Diego, but hadn't pitched this season due to a right knee injury.

His presence was welcomed as starters Ryan Borucki (elbow), Clay Buchholz (shoulder) and Matt Shoemaker (knee) are all on the IL along with reliever Ryan Tepera (elbow).

Rowdy Tellez extended his hitting streak to a career-best eight games with a leadoff double off Weber in the second inning. He came home on a double by Freddy Galvis.

A little rusty at times after making just one minor-league start, Richard held Boston to one earned run and two hits over his 54-pitch effort.

He was wide on a pickoff attempt in the first inning, had a balk in the third and uncorked a wild pitch that was three feet off the plate later in the frame. Boston tied the game when Nunez scored on a Michael Chavis groundout.

Richard hit Andrew Benintendi with a pitch in the fourth inning and Weber tagged Tellez in the bottom half on an 0-2 pitch that appeared to get away. It resulted in warnings from home plate umpire and Regina native Stu Scheurwater.

Montoyo was hoping Richard could throw 50-60 pitches and he did just that, walking a pair and striking out two.

"Physically I felt great," Richard said. "Clearly, mechanically there were some issues. I didn't command the ball as well as I would like to. But to come away, being in the ballgame after four innings, is the end goal.

"I was able to do that so I feel good about that part of it."

The Red Sox took the lead in the sixth inning off Sam Gaviglio (3-1) when Devers doubled to bring home Bogaerts. Devers scored when Pearce hit a long single off the wall.

Weber allowed one earned run and three hits. He had four strikeouts and did not issue a walk.

In the seventh, Toronto reliever Elvis Luciano gave up a double, single and RBI double before striking out Bogaerts and Devers and getting Pearce on a flyout.

Boston tacked on another run in the eighth inning when Nunez singled to plate Benintendi. Pearce hit his first homer of the season in the ninth.

Smoak also went deep in the ninth for his eighth home run on the year. The Blue Jays managed just five hits.

Thousands of schoolkids were on hand for the 12:37 p.m. start. It pushed attendance up to 36,526, almost two times the season average at the domed stadium.