‘A moral catastrophe:’ Food bank visits up 14 per cent over last decade 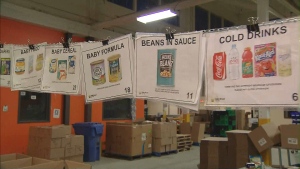 The number of visits to Toronto-area food banks declined by nearly five per cent last year but remains well above the levels recorded prior to the 2008 financial crisis, a new report has found.

The Who’s hungry report is conducted by the Daily Bread Food Bank and North York Harvest each year.

This year’s report found that there were a total of 914.470 visits to the estimated 200 food banks and agencies supported by the Daily Bread Food Bank over a 12-month period that ended in March. While that number is down from the 990,970 visits recorded last year, it is up 14 per cent from April, 2008.

“This year represents the 10-year anniversary if you will of the 2008 financial crisis and despite having a tremendously strong economic recovery in certain spheres, and we can point to a record stock market or record real estate levels, we are also seeing record levels of food bank usage here in Toronto,” North York Harvest Executive Director Ryan Noble told reporters during a press conference at Queen’s Park on Wednesday morning. “As the report outlines, we have plenty of room to grow.”

Noble said that shift in poverty has effectively “overwhelmed” the food bank system and left providers struggling to open up new facilities to serve residents in farther flung parts of Toronto.

“It causes two big issues. One being that a 61 per cent increase is usage is very difficult to address, particularly when you are dealing with food banks that are volunteer-driven and rely on charitable funds to sustain themselves. On top of that it is a real change in the nature of the demographics of the inner suburbs, so we haven’t had the services – food banks – and also the supporting services to reduce the need for food banks across that same geography. It creates a real problem.”

The report found that the plurality of food bank users are between the ages of 19 and 44 (36 per cent) but is also found that an increasing number of them are above the age of 65 (8 per cent compared to 3 per cent in 2008).

There was also a significant increase in food bank users who identify as having a disability. That group accounted for 62 per cent of all food bank visits last year compared with 48 per cent in the 2008.

“We are seeing people who are more vulnerable and who are entering into the years where healthcare costs are traditionally the highest increasingly turning to food banks due to food insecurity – the inability to put nutritious, appropriate and affordable food on the table for themselves and their families” Noble said. “We know that this will lead to higher healthcare costs, so we see this as both a moral catastrophe and also an indication of a looming fiscal crisis.”

The release of the report comes ahead of the provincial government’s self-imposed deadline of Nov. 8 to announce its plans for social assistance reform.

While Noble said that there is an “opportunity” for new governments at the provincial and municipal levels to “address concerns that their predecessors have not,” Daily Bread Food Bank CEO Neil Heatherington told CP24 that there have been “concerning early warning signs that social policies and social infrastructures may be cut.”

“We are anxious to make sure that the province and city realizes that there is an alarming trend and that we can do something about it,” he said. “An average food bank user has about $8 a day to live in after they pay for their housing and that is just wrong. We can’t tolerate that as a city.”