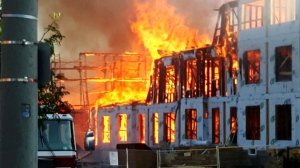 Emergency crews are on scene at a massive fire at a townhouse complex in Whitby. (Submitted)

Investigators with the Office of the Ontario Fire Marshal will be in Whitby today as they begin to look into what caused a massive fire at a under construction townhouse complex on Thursday evening.

The fire at the townhouse complex on Pallock Hill Way began shortly after 6 p.m. and wasn’t completely knocked down until around 12:35 a.m.

According to Whitby Fire Chief Dave Speed, the blaze engulfed about 14 under construction homes at its peak, all of which were framed but without siding.

Speed said that two firefighters sustained minor injuries battling the blaze but are both expected to be OK.

The cause of the blaze remains unknown, though one area resident who called 9-1-1 told CP24 that it appears to have started in the upper level of one of the homes.

“There was a bit of smoke, there was no fire but I stopped at the corner because I thought there was something going on. I could hear a little bit of crackling and then I saw that the ceiling in one of the units was on fire,” Michelle Davis said. “Within seconds there was huge black smoke coming out and within a couple of minutes it was all engulfed.”

Some of the townhouses were slated to be completed within a month while others weren’t expected to be finished until later this year.

The developer says that it may take up to five months to rebuild the complex.

Emergency crews are on scene at a massive fire at a townhouse complex in Whitby. (Submitted)