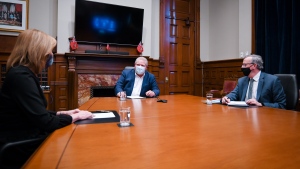 Ontario Premier Doug Ford’s cabinet is actively considering whether to once again declare a provincewide state of emergency as COVID-19 cases and hospitalizations spike dangerously.

Invoking a state of emergency is one of the options that is under active consideration as the premier meets with his cabinet Monday night, multiple sources confirmed to CP24 and CTV News Toronto.

The move would give the government the power to enact new measures above and beyond those entailed in the current provincewide lockdown. An emergency order would give Ford the power to close more businesses, prohibit events and gatherings and legally compel people to remain at home.

The emergency declaration would also give the province the power to create and implement enhanced public health measures designed to curb the spread of the virus, sources said.

The Ford cabinet will consider a raft of new measures to combat coronavirus spread in Ontario at a meeting tonight but that won't include a curfew, after health officials worked through the weekend to develop a new strategy.

A government source told CP24 that work to develop new measures is still ongoing, and the final package of measures will be considered at a cabinet meeting tonight, before they are announced publicly on Tuesday morning.

Premier Doug Ford confirmed as much as he walked into his office at Queen's Park on Monday morning.

"Well we worked all weekend, right until late hours last night, we’ll be going to cabinet with recommendations tonight and we will make an announcement tomorrow," he said.

Other measures being considered by cabinet include lowering the limit for outdoor gatherings from 10 people to five; limiting permitted hours for shopping to between 7 a.m. and 8 p.m., limiting office spaces to either no workers or only essential workers and further restrictions on the construction industry, sources said.

The existing rules for health care services, dental offices, physiotherapy and chiropractors would remain the same, sources with direct knowledge of the recommendations say.

The cabinet decisions have not yet been finalized.

However a government source indicated to CP24 that a curfew is not part of the new group of measures being presented to cabinet after public health officials discounted it.

The province declared a state of emergency during the first wave on Mar. 17, 2020. The move led to the shutdown of much of the province's economy, extended school and child care closures and restrictions on public gatherings.

The state of emergency officially ended in July, after the Ford government passed the Reopening Ontario Act.

Many of the measures included in the original state of emergency were allowed to continue under the Reopening Ontario Act, with the caveat that the province could only extend or amend existing measures.

Meanwhile, Toronto Mayor John Tory said for the first time he could support a curfew as part of the new effort, but urged the province to consider narrowing the list of businesses deemed essential to keep more people at home.

“I don't rule a curfew out, but I really question whether it will be the most effective. If you have a curfew, can we enforce it,” Tory told CP24 on Monday.

“If you said to me that short of a curfew you had to put more hours of restrictions on when you could get food, I would be perfectly comfortable with that,” he said.

Ontario reported 3,945 new coronavirus cases on Sunday, setting a new record, with Toronto seeing 1,160 on its own.

Nearly 400 people are in hospital in the city, with another 1,000+ hospitalized elsewhere in Ontario.

Ontario Medical Association President Dr. Samantha Hill said doctors in the province are not looking forward to having to ration basic care if cases continue to increase.

"Our hospital system isn’t set up to be able to handle thousands of people in the ICU," she told CP24. "We did not train to decide whether someone gets a ventilator or not based on the availability of ventilators, we trained to save lives."

The case growth prompted the Ford government last week to postpone the reopening of schools in southern Ontario for most of the month, and a further pledge to release modelling and greater public health measures on Tuesday.

Tory reiterated his call Monday for the province to just get on with it.

“Every day puts more strain on the health-care system and frankly gets more people sick.”

The Ford government has been criticized repeatedly this fall and winter for spending days pondering new public health measures, or announcing new measures but having them take effect days after they are announced.

In December, Ford announced a provincewide lockdown on Dec. 21, only to have it take effect five days later.

Michael Garron Hospital intensivist Dr. Michael Warner said he was baffled why the Ford government has not acted more quickly over the past several weeks.

“We need a lockdown that at the very least emulates what we had in wave one. The wave one lockdown was more effective than the kind of lockdown we have had so far. We cannot delay. I don’t quite understand the leadership style of foreshadowing that more measures will be required but not implementing them right away,” he told CP24.

“That only increases the chance that more people will die and I actually think it is irresponsible not to implement more restrictions right away when you are sitting on the data that shows it is necessary. That I am very disappointed in, perhaps more disappointed than by any other thing that the province hasn’t done so far.”

He urged the province to move as quickly as possible with new measures.

“This is as serious as things have ever been and ongoing delays and Cabinet trying to figure out how to get this exactly right will only lead to more death.”

On Monday, Ontario added another 3,338 COVID-19 cases and 29 deaths. Hospitalizations hit their highest point yet in the pandemic at 1,563.

NDP leader Andrea Horwath said on Twitter on Monday that new restrictions should come alongside additional supports for businesses and workers.

"Tougher measures must be backed by a major investment in immediate supports like paid sick days, safe isolation facilities, and direct financial help for small business owners and individuals," she said.

Meanwhile, Tory repeated what he has said since December, that Ontario needed to undergo a second full lockdown, similar to what was done in the spring, in order to get COVID-19 spread under control.

“I think we need to go through a period where pretty much everything is closed like the spring. I wasn’t happy but we got through it and it worked because people stayed home because everything was closed.”

He said that he thinks there are businesses operating under the current lockdown rules that could be closed.

“Number one are big box stores,” Tory said. “I never understood for the life of me that if we were going to close down small retail, and say you couldn’t go in those stores and they couldn’t be open except for curbside pickup, and thank heavens for at least that, I never understood that. If we’re going to say retail is closed, then it is closed.”

He said that banks, which were shutdown in the early spring, could also be closed to the public given the capabilities of electronic banking.