Notes from the campaign trail: Liberals, Conservatives in tight race as leaders sell their platforms 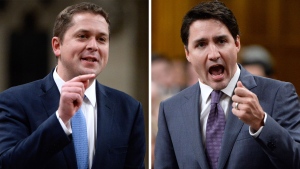 The Conservatives and Liberals are locked in a tight race for the right to govern in the federal election. With most of the big policy announcements now out of the way, the leaders of the two main parties are zeroing in on the "choice" Canadians have to make on October 21. It's time to sell the program.

On Tuesday in Toronto, Conservative leader Andrew Scheer stood alone - he is always alone making his announcements - in front of Canadians flags trying to look every inch a Prime Minister in waiting, Scheer launched into an attack on Liberal leader Justin Trudeau's foreign policy record. Then, he announced a 25 per cent cut in Canadian foreign aid.

"We will cut 25 per cent in foreign aid currently going to corrupt regimes and middle and higher-income countries. It will start by taking the money that Justin Trudeau's currently squandering overseas and spending it at home to provide much needed and long overdue help to Canadian families so they can get ahead," Scheer said.

Reporters asked Scheer repeatedly where he will find the money for his long list of tax credit promises. Hitting on foreign aid is an easy choice for Scheer.

"So, this is a very clear choice this election between Justin Trudeau's record on foreign policy. And Canadians have the choice between sending more of their hard-earned tax dollars to countries that rank relatively high on the development index, countries like Italy like Brazil like Turkey and hostile governments like Iran.

Justin Trudeau has made his choice I have made my choice we will redirect that money here at home to help Canadians get ahead."

Minutes after Scheer's announcement, the Liberal Party had Justin Trudeau stay focused on his guns and crime message in Richmond Hill.

For the second day, Trudeau dodged his party's decision not to ban handguns. And for the second day, the people chosen to be with Trudeau were not on side with the Liberal program. Yesterday, medical professionals and Trudeau met with calls for a national ban on handguns. On Tuesday, it was GTA mayors that lined up behind the Liberal leader with all of them in favour of a ban he refuses to back.

Trudeau too painted the gun issue as a choice.

"Liberals want to strengthen gun control, and conservatives want to weaken gun control. That is the choice facing Canadians on October 21," he said.

Trudeau won't ban handguns in Canada, but he says he will help municipalities have the option to ban handguns. Voters in the GTA might not approve of the choice the Liberals made to keep gun owners happy by not banning handguns that are being used almost daily to wound and kill in their neighbourhoods.

Scheer and Trudeau will continue to hammer at each other, looking for ways to define their opponent to sway undecided Canadians to make their choice.

The stakes are high, and it will force the two war rooms to make a political choice. In the coming days, there will be a temptation to choose to "go negative."