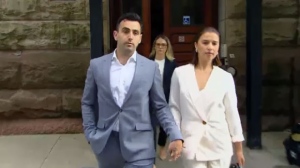 TORONTO -- The sexual assault trial for Hedley frontman Jacob Hoggard is set to begin next month.

The singer of the Canadian rock group has pleaded not guilty to two counts of sexual assault causing bodily harm and one count of sexual interference.

Hoggard was arrested and charged last summer after allegations of sexual misconduct emerged.

Police say the allegations relate to three separate incidents in 2016 involving a woman and a girl under the age of 16.

Last month a judge ruled that the crown had a strong enough case to proceed to trial and Hoggard requested to be tried by a jury.

Hoggard has previously denied engaging in non-consensual sexual behaviour, but has said he acted in a way that objectifies women.

The trial date has been set for Sept. 27.