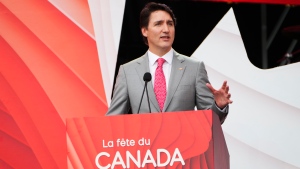 Prime Minister Justin Trudeau called for unity amid a potentially divisive national holiday on Friday, using his official Canada Day address to call for deepened commitment to Canadian values like hope and kindness.

OTTAWA - Thousands of celebrants who flocked to the national capital for Canada Day festivities heard an impassioned appeal for unity on Friday as the prime minister urged them to reclaim the Maple Leaf as a national symbol.

The exhortation from Justin Trudeau and other dignitaries came on another potentially divisive day in Ottawa, as those intent on marking the first in-person Canada Day celebrations since the COVID-19 pandemic honoured the occasion alongside protesters opposed to public health mandates and the current Liberal government. Canadian flags became a prominent symbol for like-minded demonstrators in January and February when they staged a weeks-long protest in the downtown core that ground much of the city to a halt.

At an early-afternoon ceremony honouring the 155th anniversary of Canadian confederation, Trudeau urged residents to remember the values the Maple Leaf stands for, including compassion, hope and justice.

“It represents our accomplishments and our desire to improve,” Trudeau said of the national emblem. “Let's remember that while we're 38 million people living in six time zones from coast to coast to coast, we only have one country to share, protect and cherish.”

Trudeau was joined by Heritage Minister Pablo Rodriguez, who told the largely red-and-white-clad crowd he was proud to see the Maple Leaf in widespread use.

The official ceremony took place off Parliament Hill for the first time in 50 years, according to Heritage Canada, citing the ongoing construction at Centre Block. Festivities took place instead at the nearby LeBreton Flats Park as well as another location across the river in Gatineau, Que. Among those who travelled across the country to mark Canada Day in Ottawa was Donna Marzolf and her 12-year-old daughter Alexis Livingstone, who came from Calgary to take part in the celebration and secure front-row seats to the main stage.

Alexis, sporting a Maple Leaf T-shirt and carrying a small Canadian flag, said she was particularly excited to see her twin sister Sophia perform O Canada at the festivities as part of the Calgary Children's Choir.

The twins' mother said the day was a celebration of “peace and safety and freedom - though that kind of has a bad connotation right now.”

An enhanced level of security met locals and visitors alike in the national capital Friday for the first in-person Canada Day events in Ottawa since 2019.

Police maintained a visible presence throughout the downtown core, with groups of officers walking the streets and patrol cars framing the entrance to LeBreton Flats Park.

Visitors had to walk through airport-style metal detectors and have their bags searched before entering.

Despite the high security, the atmosphere was relaxed and Trudeau took time to meet and greet members of the crowd before heading to the stage for his speech.

Trudeau praised Canadians who worked hard to improve life for others. He specifically cited Terry Fox, who ran across much of Canada to raise money for cancer before his death in 1981.

Trudeau's comments could be seen as a dig at James Topp, a Canadian soldier charged for speaking out against COVID-19 vaccine requirements. Topp walked from B.C. to Ottawa in opposition to COVID-19 vaccine mandates and arrived in the capital on Thursday.

The prime minister told the crowd “Canada is about people who are constantly fighting for something instead of against.”

Similar sentiments echoed through Trudeau's official Canada Day message, released earlier on Friday, in which he said the national flag was more than just a symbol.

Trudeau told the Ottawa crowd on Friday that there had been “serious faults in our history” and the discovery of unmarked graves had caused pain and heartbreak.

In his official message, the prime minister spoke about Canada's “historic wrongs,” saying while we can't change history, we can work to build a better future.

Brenda Noseworthy, who came to Ottawa from Newfoundland for the official celebration, described the atmosphere at LeBreton Flats as “low key.”

But she thought people were slightly more nervous than usual, citing the pandemic and protests as possible factors, adding she supported the plan to move festivities off Parliament Hill.

Karen MacDonald flew from Ladner, B.C., and was attending her first Canada Day celebrations in Ottawa.

“It's totally thrilling to me to be here in person,” she said. “So many different people in the city are all wearing red and white, with flags. It makes my tummy hurt with pride.”

The prime minister, Gov. Gen. Mary Simon and Rodriguez took part in an Indigenous reflection ceremony on the banks of the Ottawa River before attending the main Canada Day event.

Stephanie Peltier from Ontario's Wikwemikong First Nation blessed water with a sacred bundle containing tobacco, sage, sweetgrass and cedar. She sang an honour song as members of a circle, including the prime minister's family, joined hands.

Simon, who also spoke at the official ceremony, praised Canadians for their hard work and perseverance during the pandemic, particularly front-line workers.

But she said the “spirit of celebration doesn't extend to everyone.”

“This day may also be a reminder of what we have lost,” she said, including Indigenous people who “still grieve lost culture, languages and lives.”

Numerous Canada Day celebrations are set to take place across the country throughout the rest of the day.

A series of events were planned in Montreal's Old Port, including an outdoor concert, face painting, a giant cake and fireworks. There will be no parade in the city for the third year in a row.

In Quebec City, activities include musical performances, an official ceremony with the Royal 22nd Regiment of the Canadian army and fireworks on the Plains of Abraham.

The largest scheduled celebration was planned with the Musqueam, Squamish and Tsleil-Waututh First Nations and renamed Canada Together. It highlighted a reconciliation theme and featured opportunities to learn more about Indigenous and other cultures that make up Canadian society, organizers said.

Festivities were to include live music, exhibits, family-friendly activities and food trucks, but the annual night-time fireworks show over Burrard Inlet was cancelled this year due to security costs.

Officials in Toronto, meanwhile, had to scramble to reschedule some planned fireworks displays after the vendor that contracted to put them on backed out at the last minute.

The city said that while one high-profile show would take place on Friday as scheduled, events at two local parks were postponed or cancelled outright as a result of the issue.

- With files from Jacob Serebrin in Montreal, Brieanna Charlebois in Vancouver and Jordan Omstead in Toronto.