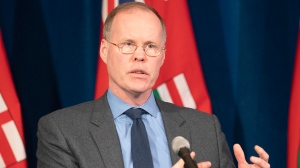 Adalsteinn Brown, dean of the University of Toronto's Public Health Department, answers questions during a news conference at Queen's Park in Toronto on Monday, April 20, 2020. THE CANADIAN PRESS/Frank Gunn

The number of COVID-19 patients in intensive care units at Ontario hospitals could exceed 1,000 by early February in a “severe but realistic” scenario, according to the province’s official modelling table.

Ontario’s COVID-19 science table released their latest projections this morning, detailing alarming new findings that paint a dire picture for the province over the coming months.

“Without significant reductions in contacts, the health system will be overwhelmed and mortality will exceed the first wave totals before a vaccine has time to take effect,” the modellers warned.

Over the past 14 days, there has been an average of 2.34 per cent daily case growth in Ontario.

"We are at a dangerous point. The number of cases in Ontario is growing between three per cent and five per cent almost every day. There are already more than 400 COVID-19 patients in our intensive care units and mortality in our long-term care homes is now on pace to exceed the tragedy of the first wave," Epidemiologist Dr. Adalsteinn Brown, co-chair of the province’s COVID-19 science table, said on Tuesday morning.

"As importantly, COVID-19 is now in every region of Ontario. This is no longer a problem of a small group of cities or one region of the province."

He said there are serious health consequences for every region of Ontario, including rationing of vital medical care.

"I know that the people working in our hospitals will do everything to help cope with this crisis. Hallways will be used to house makeshift intensive care beds, field hospitals will hold patients throughout the winter. But as we climb closer to 1,000 intensive care beds, about half of our capacity filled with COVID-19 patients in February, we will have to confront choices that no doctor ever wants to make and no family ever wants to hear," he said.

He was quick to note that the impact of these capacity issues will be far-reaching.

"The choices will affect all patients needing intensive care, whether it is patients who have a heart attack, who have been in a motor-vehicle accident, who have COVID-19 or any other cause. This also means care for thousands of patients waiting for surgery will be delayed or cancelled while we add more patients to this wait list," Brown said. "Simply put, delays kill."

The modellers also predict that the province will see more virus-related deaths during the second wave of the pandemic than the first. The latest projections indicate that between now and the end of February, deaths per day will likely double from 50 to 100 if more restrictions are not implemented.

"This would really put COVID-19 into competition for being the single greatest cause of mortality on a daily basis at that point, potentially larger than both cancer and heart disease," Brown said. "It is already larger than virtually every other cause we look at but this will put it into the first position with very little opportunity for challenge."

There have been a total of 5,053 virus-related deaths in the province since the start of the pandemic and if Ontario continues on its current path, Brown said our cumulative death toll could potentially double.

Despite efforts to distribute the COVID-19 vaccinate to all long-term care homes in the province as soon as possible, the modelling table said that under the worst case scenario, deaths among residents of long-term care homes during the second wave of the pandemic could reach a total of more than 2,600 by Feb. 14, exceeding the 1,815 deaths recorded during the first wave.

20,000 new cases per day 'quite possible' by mid-February

Brown noted that if Ontario hits five per cent case growth, a situation he described as "quite possible," the province could see 20,000 cases per day by the middle of February.

The science table warned that variant B.1.1.7, commonly referred to as the UK variant, could “drive much higher case counts, ICU occupancy and mortality as community transmission occurs.”

On Tuesday, the province said that there are now 16 confirmed cases of the UK variant, which is believed to be about 56 per cent more transmissible.

If the variant continues to spread widely, the modelling table said, the doubling time for cases in the province could drop down to just 10 days.

Included in the new modelling was a survey of Ontario residents that gauged how many people are following current restrictions put in place by the provincial government.

According to the survey results, the majority of Ontarians are following the rules but despite this, “mobility and contacts between people have not decreased.”

“Case numbers will not decline until more of the population follows their example,” the modelling table said in the projections released today.

Dr. Barbara Yaffe, Ontario's associate chief medical officer of health, said the recent mobility data shows that many people opted not to stay in their regions following the implementation of lockdowns.

"Despite going into a shutdown in the grey zones, people were still moving about. They were going to adjacent regions to go shopping," she said.

"We know that a third of people, according to the survey, are not following public health measures. I think what it shows is that the shutdown was not enough. We need more stringent measures."

On Tuesday, Premier Doug Ford announced the implementation of another state of emergency in the province and also issued a provincewide stay-at-home order.

New public health measures, which include slightly reduced hours of operation for some essential and non-essential businesses, will come into effect on Thursday and will remain in place for 28 days.

Adalsteinn Brown, dean of the University of Toronto's Public Health Department, answers questions during a news conference at Queen's Park in Toronto on Monday, April 20, 2020. THE CANADIAN PRESS/Frank Gunn