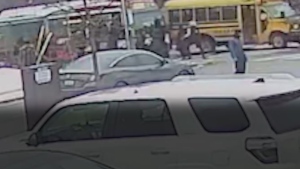 A still of the surveillance footage obtained by CTV Toronto of a swarming attack in Scarborough on Monday, Jan. 23. (CTV News Toronto)

Four 13-year-old boys have been charged in connection with a "swarming" attack on board a TTC bus in Scarborough.

Toronto police said two of the boys are facing one count of assault, while the other two are facing two counts of assault.

The arrests come after CTV News Toronto obtained security footage from a local business that shows at least a dozen people pushing and shoving outside a TTC bus stopped near Kennedy and Merrian roads on Monday at around 3:35 p.m.

The footage was captured at the same time and place as a “despicable swarming” style assault of two TTC employees.

“There were two on-duty TTC operators that were on their way to a relief point to pick up their vehicle and go about their shift, and they were attacked by, as police have said, by a group of 10 to 15 people,” TTC spokesperson, Stuart Green, told CTV News Toronto.

While the TTC workers did not sustain life-threatening injuries, Jessica Davis, who saw what had happened, says they looked “really shocked” and that the bus driver was “very upset.”

“She was like visibly – her hands were shaking,” Davis said.

Police would not confirm if the incident captured on video was the swarming of TTC employees. However, officers collected the exact same surveillance footage as evidence for their investigation on Tuesday morning, and the time stamp on the video matches the time of the incident.

On Monday, police said they received reports of 10 to 15 youths attacking uniformed employees on the bus before fleeing the area.

Police said that there was in fact a larger group of youth on the bus but they said that investigators believe only four were directly involved in the assault.

Police, however, said that the investigation is ongoing and that officers are still appealing to anyone with information to come forward.

The four boys cannot be identified under the terms of the Youth Criminal Justice Act. They are due in court on March 21 at 2 p.m.

The union representing TTC workers, ATU Local 113, calls on the City and TTC for support in advocating for their members during these repeated acts of violence.

“We have to put an end to these acts of violence and disrespect against transit workers,” Marvin Alfred, President of ATU Local 113, told CTV News Toronto on Tuesday.

In a news release posted Tuesday, the union said, “enough is enough,” underpinning the message that their members “should not have to go to work every day in fear of their lives.”

The swarming-style attack comes just a couple of days after a TTC operator was shot with a BB gun in Scarborough on Saturday night.

Alexandra Stoeckle, the 24-year-old operator, came forward and wrote an open letter to Mayor John Tory, and TTC CEO Rick Leary, calling for something to be done.

“These are not one-off incidents, these are targeted attacks. Employees and passengers alike are unsafe when riding, driving and waiting for the TTC,” Stoeckle wrote, later adding that these violent incidents should be stopped.

“There has to be change. And people need to remember we are human beings, we have families, and we are people before we are TTC employees.”

A still of the surveillance footage obtained by CTV Toronto of a swarming attack in Scarborough on Monday, Jan. 23. (CTV News Toronto)