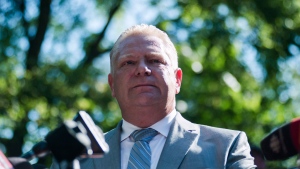 The city’s integrity commissioner has found that Doug Ford broke city council’s code of conduct in his dealings with two businesses while he served as a city councillor.

A report released publicly on Thursday found that Ford acted improperly as a councillor with respect to Apollo Health and Beauty Care, Inc. and R.R. Donnelley and Sons, businesses that his family company Deco had dealings with.

“Councillor Ford took no steps to establish clear lines of separation between his responsibilities as a member of Council and his duties as a principal of Deco. “

The complaints were filed by three members of the public between May and July of 2014 and alleged that Ford broke numerous council rules in his dealings with the two companies as a city councillor in 2011.

In her report, Integrity Commissioner Valerie Jepson found that two of those rules were actually broken, one pertaining to improper use of influence when Ford arranged meetings with and made inquiries of city staff for Apollo and Donnelley; and another around gifts and benefits when Ford accepted dinner and tickets to a Rogers Cup tennis match from Apollo representatives as thanks for his help.

Both companies had long-standing relationships with Deco, where Ford continued to act as a representative after he was elected.

“It was an improper use of Councillor Ford's authority as a member of Council for him to facilitate meetings between Donnelley and City officials because Donnelley was a client of Deco and Councillor Ford was actively involved in developing the Donnelley and Deco relationship at the very same time that he was advancing Donnelley's interests within the City,” Jepson found in assessing Ford’s dealings with Donnelly.

She also found that with regards to Apollo, “Councillor Ford's office became a point of first contact when other contact points were available : the ward councillor and officials in Economic Development.

“Apollo preferred the support provided by Councillor Ford and his office, although there is no evidence that support was unavailable from either the ward councillor or the City division.”

Ford has said that he did not personally gain anything from his dealings with the companies as a councillor and has maintained that he was simply advocating for them because the success of their business would be of benefit to the city and could help save jobs.

While Jepson found that Ford broke the rules of conduct, she was not able to register any change in the amount of business between Deco and the two companies during Ford’s time at city hall.

“For the time period that the Councillor was in office, 2010 to 2014, the amount of business between Deco and Donnelley remained relatively constant, annually,” Jepson found.

However she said she was unable to ascertain the same with regards to Apollo because both Apollo and Deco refused to provide information about the volume of their business dealings during the time that Ford was in office.

Normally when a member of council is found to have broken the rules of conduct, council can sanction the member by suspending their pay or reprimanding them.

But while the investigation found that Ford broke council’s rules of conduct, Jepson said she sees no point in imposing a reprimand as Ford is no longer a member of council.

“While it may be within the authority of Council to reprimand a former member, it is my view that imposing a reprimand on a person who is no longer a colleague of the Council members responsible for issuing the reprimand would serve no purpose,” Jepson wrote in her report.

While Ford is not currently in office, he has said that he is considering a run for mayor in 2018.

While the complaints were filed in 2014, it took more than two years to complete the report because of a backlog of cases, with the priority going to those that involved sitting members of council, Jepson said.

In a statement released Thursday, the group Democracy Watch said the report took much too long to come out. The group welcomed its findings, but said that the city should have stronger tools for dealing with conduct violations.

“Unfortunately, Toronto's ethics enforcement system is very flawed because it has only weak penalties that don't apply to someone like Ford who is no longer a councillor,” the statement said. “As well, the penalties of a reprimand or at most 90 days of income lost are far too weak to encourage compliance with the council's code.”