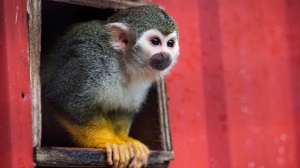 Rudy a Squirrel Monkey looks outside at the Story Book Farm Primate Sanctuary in Sunderland, Ont., on Tuesday, August 16, 2016. THE CANADIAN PRESS/Nathan Denette

A Toronto bylaw set to come into effect in 2018 will ban all educational displays and interactive exhibits involving “exotic” animals in the city, something a national zoo lobby group says will deprive children of valuable interactions with wildlife.

Canada’s Accredited Zoos and Aquariums (CAZA) said the ban will prohibit any activity involving exotic animals, such as snakes or even common cattle such as events at schools or children’s birthday parties that occurs outside of Toronto Zoo or a licensed facility like Ripley’s Aquarium.

She said the new rule severely hampers the ability of schools and other organizations based in an urban centre like Toronto to interact with wildlife beyond common domesticated animals like cats, dogs, or urban dwelling rodents like squirrels.

The city’s current prohibited animals list includes all crocodiles, snakes longer than three metres, any sort of cattle, rodents weighing more than 1.5 kilograms, any primate, bat or member of the feline family other than a common cat.

“There’s a big difference between understanding pets and farm animals than there is with actual wildlife. “

City municipal licensing and standards staff say groups can still use animals at public events for educational purposes, just not any of the animals on the prohibited list. The Toronto Zoo will also still be able to conduct educational programming with exotic animals outside of their property.

Earlier this month, at the same meeting where councillors approved a backyard chicken coop pilot, Toronto city council passed a motion that would ban the use of all prohibited exotic animals for educational purposes.

A previous bylaw included an exemption for any organization conducting temporary educational displays of exotic animals. That exemption has now been removed.

Simple possession of a prohibited animal, the full list of which can be found here, is punishable with a $240 fine, according to bylaw documents available on the city’s website.

Council also voted to add penguins, cranes and flamingoes to the prohibited animals list this month.