Number of planned subway closures will more than double in 2020 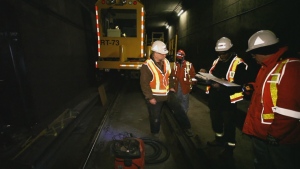 The number of planned subway closures will more than double in 2020, largely due to work on the TTC’s signal system and the Eglinton Crosstown line.

A report that will be considered by the TTC’s board next week details plans for 166 planned subway closures, late openings or early closings in 2020.

In 2019, there were 73 planned closures, late openings or early closings.

“Two major projects are currently progressing on Line 1Yonge-University - the ATC re-signalling project and the Eglinton Crosstown project. These make up the majority of the full weekend closures as the complexity of these projects does not allow for work to be conducted during the regular nightly maintenance window,” the report notes.

In the report, staff note that without scheduled closures crews would only be left with an approximately three-hour window for work on weeknights and Saturdays and a five-hour window on Sundays.

“Because the nature of the work requires TTC staff to set up work zones and move equipment into the work area, typically less than two hours of physical work can be achieved each night,” it notes.

The TTC says that it does expect to need fewer closures in future years with only 36 on the books for 2021 and 29 planned for 2022.