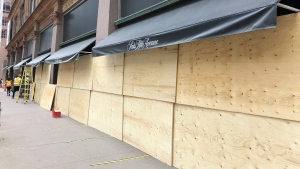 Mayor John Tory says that police have been made aware of some online chatter suggesting that a peaceful protest against anti-black racism this weekend “could be accompanied by some sort of misbehaviour.”

There are unconfirmed reports that the group Black Lives Matter is organizing a demonstration that will begin at Trinity Bellwoods Park at 2 p.m. on Saturday and then end outside Queen’s Park later that afternoon.

A flyer, purportedly from the group, describes the event as a “peaceful protest against the deaths of unarmed black people at the hands of police officers and the racism they continuously face.”

The planned demonstration comes on the heels of another peaceful protest against anti-black racism last weekend that saw an estimated 4,000 people gather at Christie Pitts Park and then march along Bloor Street without incident.

Tory, however, told CP24 on Wednesday that police will nonetheless be monitoring things after receiving some information suggesting that a Saturday protest could be infiltrated by people looking to “wreak havoc downtown.”

Tory was careful to point out that he believes those unspecified threats are largely the musings of “tiny little minority of people who sit in their basements in the dark and send these kind of messages and incitements back and forth to each other.”

He also added that anti-black racism is a “lived reality” faced by people across the city and that he will welcome continued protests to “move things forward and draw attention” to the issue, so long as they remain peaceful.

“There is still anti-back racism (here); not just in the United States. It is a lived reality for people here who are black or for people from marginalized communities,” he said. “I don’t have the experience. I never have walked into a store and the minute I walk in have had somebody follow me around. I have hardly ever have been stopped as the driver of a car and my career has been allowed to advance on merit and how I have done in school and how I have done in my job requirements without any regards to the colour of my skin. So there is still a lot of problems we have to deal with here.”

On Monday a number of downtown Toronto businesses were seen boarding up their windows amid the unrest south of the border, however the boarding put up at the Bay and Saks Fifth Avenue department stores on Queen Street West was later taken down.

Speaking with CP24, Tory said that the unspecified information about possible weekend unrest “is in the hands of the police” and that “everybody is preparing for it.”

“Hopefully they are just preparing for one more peaceful demonstration and hopefully one where people, as best as they can, take the advice of the medical officer of health into account because that is still a reality too,” he said of the threat posed by COVID-19.