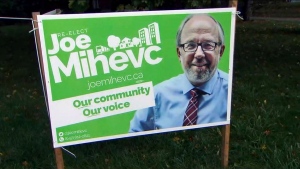 A campaign sign for Joe Mihevc in Ward 12 is seen.

“I wanted you to know that I endorse Joe Mihevc for Toronto-St. Paul’s,” Tory says in a robocall sent to voters in the riding Friday afternoon. “Joe Mihevc and I don’t agree on everything but I know he always places the city’s best interests first.”

It’s the second endorsement the incumbent mayor has made this campaign and the first in a race where two previous incumbents are facing off against one another after the Ford government shrunk the size of city council from 47 to 25, merging wards together to match the provincial ridings in the city.

Tory says in the robocall that Mihevc has served in the old Ward 21 as his poverty reduction advocate since the death of downtown councillor Pam McConnell.

“I am confident I can work with him in the next term on poverty and many other issues,” Tory says in the robocall.

For his part, Mihevc says he’s delighted by the endorsement.

“It doesn’t mean as he says in the tape that we agree on all of the issues, it does mean there’s a way of working together.”

“And we have worked together on supervised injection sites, the poverty reduction strategy, on student nutrition programs, on public health issues. And I hope he finds my style collegial and we try to find that island, that place where we can do some good city work together.”

But he’s not returning the favour, saying his residents support both Tory and Keesmaat.

“I look forward to working with whatever mayor the good citizens of Toronto give me.”

Mihevc’s main opponent, Matlow, served as the incumbent council in the adjacent ward, Ward 22, under the previous 47-seat system.

He drew the ire of Tory over the spring and summer, calling for a public inquiry into the planning process for the Scarborough subway extension, saying “transit planning in Toronto is dysfunctional.”

Tory replied at the time that the call for an inquiry was a “publicity stunt.”

Speaking to CP24 on Friday, Matlow suggested the endorsement of his opponent was punishment for criticizing the Scarborough subway extension, which Tory supports and wants no more debate on.

“I know that there are consequences when you take a stand for honest transit plans, but at the same time I am going to keep doing it,” Matlow said.

He said that he agrees with Mihevc on more issues than they differ on, and questioned the value of an endorsement from the sitting mayor on his race.

“I don’t know honestly how much influence it has on people when one politician say that another politician is the one they should support.”

A campaign sign for Joe Mihevc in Ward 12 is seen.