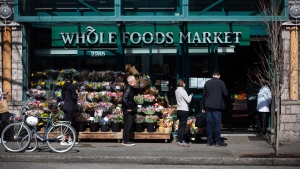 People maintain distance between one another while waiting in line to enter a Whole Foods Market grocery store as the store limits the number of customers permitted inside due to concerns about the spread of COVID-19 in Vancouver on Saturday, March 21, 2020. THE CANADIAN PRESS/Darryl Dyck

DELTA, B.C. -- Walkers offer a nod, a smile or a "hello" to each other but only after stepping aside to leave a wide berth on trails at a park they've escaped to in the age of physical distancing.

Jeff Radons ventured out of his home and into his "backyard" at Watershed Park in Delta, B.C., for fresh air and human connection but with at least a two-metre separation from others as part of measures aimed at reducing the spread of COVID-19.

"We're social people, we need that connection," Radons says before he and his 11-year-old son, Matt, move to the edge of a trail, allowing two passersby to walk past them.

"But we gotta roll with it. It's a global problem. If you start making it a downer it's going to become one. So you just gotta make light of it."

Some cyclists also acknowledge each other and walkers as well on a wide trail where making way for others has four people moving along single file at a distance from one another.

The same etiquette seems to be followed on the street in Delta as walkers move over on sidewalks or even cross the road to create space between themselves and others out for some exercise as gyms and community centres remain closed.

Radons says his quick trips to the grocery store have also required some unusual navigating to avoid getting too close to other shoppers in the aisles.

"When I come around the corner and see someone I just back pedal and smile: 'Sorry, go ahead!' "

At a Save-On grocery store in Delta, shoppers waiting their turn in a roped-off area alongside a row of cashiers stand two metres apart as indicated by strips of tape on the floor.

Other visual references reminding customers to keep their distance include clear plastic barriers between staff and shoppers, as well as signs encouraging physical distancing.

Diane Brisebois, president of the Retail Council of Canada, says grocers across the country are noticing more adherence to physical distancing guidelines as store managers repeat the message in various ways, getting positive feedback from customers and greater appreciation of employees.

"They're thanking them. They're being a bit more courteous," Brisebois says. "I think there's been a bit more social media around being kind, that these people are there to protect you, to feed you, to help you. We have noticed a marked difference in the last three to four days."

Shoppers also appear to be listening to public messaging to not touch products unless they're buying them, Brisebois says from Toronto.

"In B.C., we applaud the government and public health officials because they have been very collaborative in working with our members in repeating that messaging," she says.

It's also important for people to remember that grocery shopping should not be considered a social outing with several family members in tow, Brisebois says.

"Because people are isolated they feel sometimes that they need to go out to the grocery store and they will bring family members or children with them."

The recognition of grocery store employees as essential service providers by the public has also helped in creating more awareness about the value of workers who remain on the job, Brisebois says.