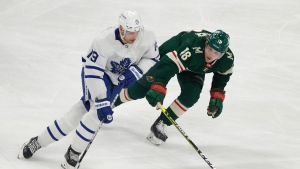 NEW YORK - Toronto Maple Leafs forward Wayne Simmonds has been slapped with a fine for a cross-check he applied to Winnipeg Jets forward Jansen Harkins on Sunday night.

The NHL's department of player safety docked Simmonds $2,250, the maximum allowable under the league's collective bargaining agreement, for laying his stick into the back of Harkins during the third period of Winnipeg's 6-3 win over visiting Toronto.

Meanwhile, Leafs centre Jason Spezza has been offered an in-person hearing with the league and will likely be suspended for kneeing Winnipeg defenceman Neal Pionk during Sunday's game.

In-person hearings are required for any suspension that could be at least six games. The date and time of Spezza's hearing have not been announced.

On the other side, Pionk is scheduled to have a hearing of his own Monday for a knee-on-knee hit on Toronto defenceman Rasmus Sandin earlier in the third period of Sunday's game.