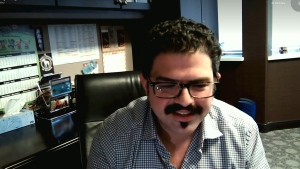 Despite an onslaught of hatred from anti-vaccine activists over a pay bump for vaccinated employees, Chapman’s Ice Cream says it has in fact received far more positive feedback than negative.

“The positive backlash of this has been overwhelming — 10 to 20 times more positive than negative at this point,” Chapman’s vice-president Ashley Chapman told CP24 Wednesday. “And I really believe that most of Canada is standing behind Chapman’s for trying to do the right thing.”

“I was having a chat with my mother and we just decided you know what? It's not fair that we're treating the unvaccinated and paying them more essentially than the vaccinated. So we thought, fair enough. We'll cover the test for the unvaccinated to make sure everybody's safe. And everybody else gets a $1 increase.”

Chapman estimates that less than 10 per cent of some 850 workers at the family-run company are unvaccinated. He said the company figured out that it was spending around $40 per week on regular COVID-19 testing for those employees.

The company has not fired anyone for not getting vaccinated. Chapman said his family saw the move as a middle-of-the-road approach to keep workers safe without stigmatizing anyone.

But the company started getting bombarded with hate online after an employee took a screengrab of a notice about the policy and posted it in an anti-vaxxer forum.

Chapman said the response was “shocking.”

“The aggression, the threats, the everything has just been constant,” he said. “The most vile things that you can possibly think of to say to another human being have come out.”

He said that includes messages from people saying they hope the whole family dies of cancer or that their business burns to the ground and they’re left with nothing.

“And those are not the worst of the things that we've been getting,” Chapman said. “Frankly, it's been shocking. These people really should be ashamed of themselves for what they're saying.”

He said once the screengrab was out on the internet, those spewing hate at the company "didn't care about the facts,” including the fact that the company has not forced anyone to get vaccinated.

“We want to take the middle ground in this whole stance to try and give a little compassion to the people that are unvaccinated and not treat them like they're their lepers or something. And the anti-vaxxers have decided that that we should be punished for not doing exactly what they think is right.”

But while some vilified the company because of its policy and called for a boycott, others praised it for taking steps to protect its workers.

“Oh, I think I’ll be adding @Chapmans_Canada ice cream sandwich bars to my grocery order. Yeah. There will be no boycotting of Chapmans here,” one Twitter user wrote.

Others started using the hashtag #StandWithChapmans.

“I hear anti-vaxxers are bullying Chapman's. Where do I buy some of this #ChapmansIceCream ?” another user wrote.

Food processing facilities have seen a high rate of COVID-19 outbreaks throughout the pandemic, often because it is difficult to distance in the workspace. Companies have come under pressure to make their facilities safer for workers.

It's not the first time that the company has received strong praise from the public.

Earlier in the pandemic, Chapman’s offered up ultra-cold freezers to help store the Pfizer vaccine, which requires storage temperatures below -70 Celsius and also offered all of its workers a permanent pay bump.