Curfew not on the table to curb Toronto's record COVID-19 spread: Tory 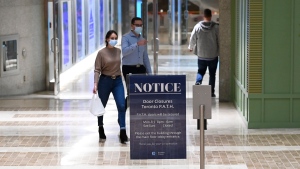 People walk around the underground PATH at the lunch hour where retailers are open during the COVID-19 pandemic in Toronto on Tuesday, October 13, 2020. THE CANADIAN PRESS/Nathan Denette

Toronto Mayor John Tory says the idea of a nighttime curfew has not been suggested as a measure to slow the growing spread of coronavirus infection in the city, though he would entertain it if public health officials thought it would help.

“If it comes up though because it comes from the medical and scientific people and they believe it will make a substantive difference in the spread of the virus, then of course I would engage in that discussion,” Tory said when asked about the move, which was enacted across California last month.

“But as of the moment it has not come forward as an option they believe will make a big difference to managing our numbers better.”

Toronto broke its record for new COVID-19 cases twice in the past two days, documenting more than 1,300 new cases over the past 48 hours.

Almost 250 people are in hospital due to infection across the city, including more than 80 in Scarborough.

Tory said such a restriction, if even thought to be effective, would likely have to be introduced by the province.

“It’s the kind of thing that would be only be effective if it was imposed by the province.”

But he questioned how effective such a move would be.

“Where is there to go, other than to gather at peoples’ private homes, which is not supposed to happen.”

Some of those retailers deemed non-essential, including the Bay, Canadian Tire, and Ikea, penned an open letter to the Ontario government on Tuesday, asking to reopen under strict occupancy limits.

Tory said he was meeting with small business leaders today and said any adjustment to the rules should be made on medical grounds, not political ones.

“It will be much less a political decision made by elected representatives than it will be a decision by the medical people,” he said if adjustments to the restrictions are made.

People walk around the underground PATH at the lunch hour where retailers are open during the COVID-19 pandemic in Toronto on Tuesday, October 13, 2020. THE CANADIAN PRESS/Nathan Denette