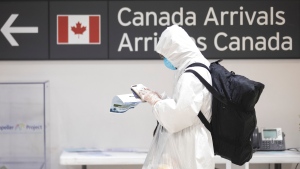 A traveller stands in the International arrivals hall at Toronto's Pearson Airport, on Friday, March 27, 2020. The Ontario Government issued an alert via phone, television and radio urging all travellers arriving from outside the country to self-isolate for 14 days, in an effort to contain the spread of the COVID-19 virus. THE CANADIAN PRESS/Chris Young

Eight flights arriving in Toronto from international destinations since the start of August have had people on board with COVID-19.

According to the federal government, the flights landed in Toronto between Aug. 1 and Aug. 4. They all had passengers who tested positive for COVID-19 after arriving in Canada.

The international flights include:

The data on the government's website is updated once a day.

Since the beginning of August, flights have also arrived in Vancouver, Montreal and Calgary with people who later tested positive for COVID-19.

Those international flights include:

It is mandatory for those coming into Canada from out of the country to self-isolate for 14 days, regardless of whether or not they are experiencing symptoms of COVID-19.

Both WestJet and Air Canada, two of the biggest airlines in North America, began selling their middle seats again on July 1 after months where the option was removed to aid in physical distancing.