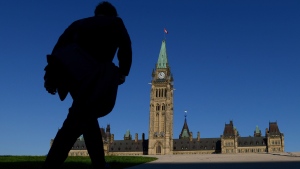 OTTAWA - Jagmeet Singh says Prime Minister Justin Trudeau's promise to work with provinces to give workers paid sick leave is a good start, but more action is needed before federal New Democrats will agree to suspend full sittings of the House of Commons through the summer.

The back and forth over paid sick leave Monday came as a small number of MPs debated a Liberal government motion proposing to waive “normal” Commons sittings in favour of expanding the special COVID-19 committee that has acted as a stand-in for the past month.

Because they hold only a minority of seats, the Liberals need the support of at least one of the main opposition parties to pass this motion. With the Conservatives demanding the resumption of Commons sittings and Bloc Quebecois not involved in negotiations, that leaves the NDP.

Shortly before debate started on the floor of the House of Commons, Singh, the leader of the federal NDP, laid out his conditions for supporting the Liberal motion by demanding real action on paid sick leave for all Canadians and support for people with disabilities struggling with the COVID-19 crisis.

During his daily news conference outside his home in Ottawa Monday, Trudeau said it makes sense to support paid leave for all workers if they're ill, so people who might be infected with the novel coronavirus don't have to choose between going to work sick and not getting paid.

“The government will continue discussions with the provinces without delay on ensuring that as we enter the recovery phase of the pandemic, every worker in Canada who needs it has access to 10 days of paid sick leave a year,” Trudeau said.

“We'll also consider other mechanisms for the longer term to support workers with sick leave.”

Yet Singh said the promise fell short of the NDP's demands.

“We've seen a positive announcement today by the prime minister, but it is not enough,” Singh told the House of Commons. “We need to see the action as well. And we are hopeful though that action will be coming.”

The NDP leader had previously suggested the federal government use the Canada Emergency Response Benefit or employment insurance to deliver paid sick leave immediately and work with the provinces to secure two weeks of leave even after the pandemic is over.

The government must also make good on a promise to provide more support to Canadians with disabilities who are struggling during the pandemic, Singh said.

The question now is how the two sides might bridge that difference - and if not, what other options might exist.

The Conservatives have said they want to do away with the special COVID-19 committee and bring back House of Commons sittings, albeit with no more than 50 MPs in the House at any one time.

Conservative Leader Andrew Scheer underscored the need for Parliament's immediate return in his address to the Commons, while Opposition House leader Candice Bergen laid out some of the key differences between a normal parliamentary session and the special committee.

Those include a lack of opposition days, private member's motions and the ability to submit order paper questions, which is one of the key ways opposition parties have to get information from the government.

“Although the special committee is one where questions can be asked, we certainly are not seeing questions answered,” said Bergen.

“And there are many things that the Opposition can do when Parliament is actually sitting in order to try to get answers and to try to hold the government to account. That is not going to be happening if this motion passes.”

But the Liberals and NDP argue the Conservatives' plan essentially disenfranchises the majority of Canadians, as MPs who live far from Ottawa or with potential health risks will face extreme difficulties attending in-person sessions.

However, all sides agree there are technical limitations to establishing a full virtual Parliament right now that do not exist for committees.

Those limitations were highlighted in a report by a Commons committee earlier this month, including concerns about hacking when it comes to MP votes and procedural questions such as how to handle points of order and privilege.

The Liberals say that is why they have proposed expanding the current COVID-19 committee by adding an additional meeting per week and using a hybrid format that will allow all MPs to participate through either in-person or virtual attendance.

“Under this motion, with a hybrid Parliament, there would be more time for questions,” government House leader Pablo Rodriguez said.

This report by The Canadian Press was first published May 25, 2020.

-With files from Stephanie Levitz