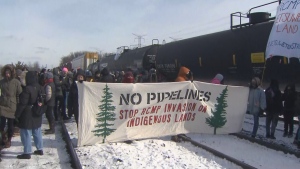 A Wet'suwet'en solidarity protest is blocking trains at a rail yard in Vaughan.

Trains leaving a rail yard in Vaughan were blocked by hundreds of anti-pipeline protesters standing in solidarity with Wet’suwet’en hereditary chiefs on Saturday.

At Macmillan Yard near Vaughan Mills shopping centre, about 200 protesters blocked westbound trains that were supposed to be heading to Hamilton, London, New York and Michigan.

As of 1 p.m., all northbound and north-west trains were also blocked.

An organizer of the event said that the participants understand there is a risk in blocking the train tracks, but that they feel  as if they have no other choice.

“We plan to stay here and continue organizing until RCMP completely leave Wet'suwet'en land, until the Coastal GasLink pipeline has completely stopped, and until the government acknowledges what it's doing to Indigenous People all across Canada,” Natali Euale Montilla said.

“We don't know what's going to happen to us, but we're at the point where that's all that we can do. That's the only thing we can do to take action so the government will take action.”

The group was served an injunction by Canadian National Railway police Saturday afternoon, but a spokesperson told CTV News Toronto the document was set on fire.

Protests erupted across the country after the Royal CanadianMounted Police (RCMP) moved into the Wet’suwet’en territory in northern British Columbia earlier this week to arrest pipeline protesters, who argue that the Coastal GasLink pipeline does not have consent from the Wet’suwet’en hereditary chiefs to build in their territory. They also say the pipeline will impact the environment and water supply in the region.

Coastal GasLink has signed agreements with all 20 elected band councils along the pipeline route, but the Wet’suwet’en hereditary chiefs say band councils only have authority over reserve land.

The original blockade on Tyendinaga Mohawk territory near Belleville, Ont. is in 10th day. Federal Indigenous Services Minister Marc Miller met Saturday with representatives of the Mohawk Nation to discuss a rail blockade that has shut down rail services across Eastern Canada.

"This is a situation that is very tense, very volatile, there are some people that have been standing out there for days, so today is a chance to talk and have a real discussion," he said.

In Vaughan, protestors gathered around a CN Train with signs that said “no more pipelines,” “water is life,” and “stop RCMP invasion on Indigenous land.” Gray said that they have built a fire and brought in food for the demonstrators.

The protest ended around 5 p.m., but organizers suggested that further action will be taken throughout the week.

The protest prompted delays on the Barrie GO line. A spokesperson for Metrolinx said that while the demonstrators were not occupying their tracks, they were close enough that trains could not safely operate.

Service along the line was shut down and trains were forced to reverse and return to either Barrie GO Station or Union Station.

- With files from the Canadian Press