TDSB approves plan that will help lower class sizes; board looking to delay start of classes by a week 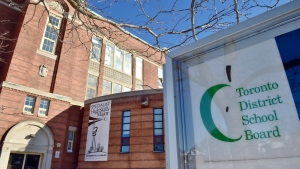 The Toronto District School Board has unanimously approved a back-to-school plan that will see it dip partly into reserves to hire hundreds of new teachers to increase spacing in elementary schools, though not by enough to fully space students.

The plan will see the board redeploy 400 staff and also hire an additional 366 teachers. The plan will make use of $6.3 million in previously committed provincial funding, as well as $2.9 million in reallocated funds from the board’s budget. The lion’s share of the money however will come from $29.5 million that the board will pull out of its reserve fund.

The plan will allow the TDSB to maintain classroom caps of up to 26 students in junior and senior kindergarten, 20 students in Grades 1 through 3 and 27 students in Grades 4 through 8. The cap on Grade 4 to 8 classes would, however, go down to 20 for schools in neighbourhoods with higher levels of COVID-19.

While class sizes will be lowered overall, it will not be by enough to meet a two-metre spacing recommendation issued by Toronto Public Health.

“It is a couple (more) students for each different category but when you look at the level of investment required to move the need even a little bit staff thought that the more appropriate balance was option two,” Interim Director of Education Carlene Jackson said, noting that had the board done nothing at all there would have been approximately 750 elementary school classes with more than 30 students this fall.

The option 2 model was endorsed by the TDSB finance committee ahead of the special meeting Thursday. The committee considered and rejected two other proposals – one that made no use of reserve funds and another that made use of $59 million in reserve funds.

Jackson warned during Thursday’s meeting that by using $59 million from its reserves the board could soon find itself in a position where it needs to make additional cuts to cover future obligations. For that reason, staff recommended the second option, which will see the TDSB draw on $29.5 million in reserves, bringing the board’s operating deficit this year to two per cent.

The board will now have to find enough space to accommodate students, as well as figure out proper supervision and transportation.

As part of the board’s plan, all students, staff and visitors will have to wear mask, with reasonable exceptions.

More detailed plans around virtual learning are expected to be released next week. However the board has said students who learn remotely will be part of a new centralized virtual school rather than virtually connected to their regular schools.

School year may start on Sept. 15

The board also heard at its special meeting Thursday that staff are considering delaying the start of classes by one week.

“We are looking at Tuesday, Sept. 15 being the first day that students will enter school,” TDSB Executive Supt. Andrew Gold said.

TDSB Interim Director of Education Carlene Jackson previously said barring a “miracle,” it is unlikely students will be back in the classroom on Sept. 8, the date kids initially were supposed to return to school.

The proposed delayed start comes in the wake of a memo from Education Minister Stephen Lecce to boards earlier this week indicating that they can stagger the start of the school year by up to two weeks if they feel that it would make the resumption of classes safer.

“At this time we really don’t think it will be feasible,” Jackson said of the Sept. 8 start date earlier this week.

Today’s meeting comes a week after the Ford government rejected the TDSB’s plan to use a “quadmester” structure in high schools and end elementary school days 48 minutes earlier in order to reduce class sizes.

The TDSB has said that a survey of elementary school parents completed earlier this month found that about 29 per cent of them don't intend to send their child back for in-person instruction in the fall. That number, however, drop to 23 per cent if smaller class sizes of 15 to 20 students were guaranteed.

For its part, the TDSB has said that it will have classroom shortages in 34 different schools under option two if every TDSB student opts to return for in-person instruction. That number goes down to four in the event that 20 per cent of students opt for online learning this fall.