Toronto cancels all major festivals and events through June, including Pride Parade 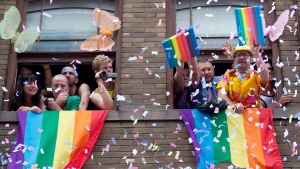 The City of Toronto is cancelling permits for all major events and festivals through June 30 due to the COVID-19 pandemic, Mayor John Tory said Tuesday.

“It has become increasingly clear that this is going to be a very long battle,” Tory said at a news conference, adding that it’s important to be upfront about the impact so that people understand the seriousness of the situation.

“Due to the COVID-19 pandemic, the City of Toronto is cancelling all city-led major events, festivals, conferences and cultural programs, and is also cancelling all city permits for major events organized by external groups at civic centres and squares, parks, public spaces (including road closures), city-operated museums and cultural centres,”Tory said. “All of those permits will be cancelled through June 30.

“This isn’t an easy decision to make, but it is necessary to protect the public and to save lives.”

The move includes the cancellation of the city’s annual Pride Parade, Tory said.

The Toronto Pride Parade is the largest such event in the country and attracts hundreds of thousands of people to Toronto’s streets each year.

Tory said that he spoke with Pride Toronto organizers Monday morning and thanked them for their understanding. He said that Pride Month will continue, but it is not yet clear what form events will take.

“The Pride Toronto team is working hard to take this challenge and turn it into an opportunity for creative collaboration and innovative programming,” Amber Moyle, Pride Toronto’s director of sponsorship & strategy told CP24 in a statement.

“We are inspired by the conversations we have had with our major cultural partners and we look forward to finding new ways of supporting the 250+ LGBT2Q+ artists we program annually.”

The move by the city comes amid a provincial ban on gatherings of more than five people (aside from families) and strikes a major blow to a number of cultural events that take place in Toronto annually.

A number of major events were scheduled to take place in the city between now and the end of June, including; The Hot Docs Festival, the Inside Out Film Festival, Canadian Music Week, Toronto Jazz Festival, North by Northeast, Tastemaker Toronto, and others.

“The city’s decision provides clear direction to event organizers to enable them to make sound decisions in support of public health efforts and their business needs, access insurance, support impacted employees and manage sponsors,” the city said a in a release.

Tory said that while he recognizes the importance of festivals to the livability and vitality of the city, protecting the health and safety of residents is of primary concern.

The city said the end date for the cancellation period will be reviewed every two weeks and may be extended beyond June 30 and that no new permits for mass gatherings will be issued until there is further direction from the city’s medical officer of health.

In alignment with the City of Toronto’s statement, Pride Toronto will no longer host the Festival Weekend on June 26-28th, 2020. Our full statement is available online https://t.co/KSXeLOs9E3 Stay proud and stay safe, Toronto. #PrideToronto #COVID19 pic.twitter.com/T7ANaknTpJ