Union for full-time faculty at York U. accuses school of deliberately misleading public 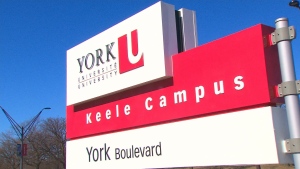 A union representing full-time faculty at York University is condemning the school for “misleading the public” about a four-week long strike involving contract faculty and other staff.

In a message posted to its website, the York University Faculty Association said that it has become alarmed by the “hard-line approach” that the school has taken in negotiations with CUPE 3903.

The YUFA also slammed the university for engaging in a “aggressive public relations” campaign, wherein it has misled students and members of the public about the impact of the strike as well as the state of negotiations.

“They have alleged that 55 per cent of classes are running normally, when less than half of the courses are continuing. The Keele campus is largely empty and Glendon College is even more so,” a statement posted to the union’s website earlier this week reads. “They have also alleged (incorrectly) that CUPE refused to drop any of its major demands during negotiations, and refused to seriously bargain.”

Members of CUPE 3903 walked off the job on March 5 after rejecting a so-called “final offer” from the university.

The two sides did briefly return to the bargaining table on March 20 but talks broke off later that night and York said that it would not enter into negotiations until the union was “prepared to work within a framework for an achievable settlement.”

York University then submitted an application to the Ministry of Labour on Wednesday to force the union to hold a ratification vote on the offer that it tabled on March 20.

The YUFA said that it has become “very concerned” with the tactics used against CUPE 3903, especially with the collective bargaining agreement between the union and the university set to expire on April 30.

It said that the university has blocked student representatives from attending public Senate meetings and has hired security guards, who have been seen filming striking CUPE members on the picket lines.

Furthermore, the YUFA also said that the university has set a dangerous precedent by “usurping the authority” of the Senate and declaring that it alone “has the authority to suspend classes.”

“We are now entering bargaining to renegotiate our own collective agreement, and the tactics used against CUPE 3903, including delayed bargaining, intense public relations, a forced ratification vote, and heightened, possibly illegal security measures, may well be employed against other campus unions such as YUFA and the York University Staff Association (YUSA),” the message posted to their website reads. “In addition, the constant dissemination of aggressive administration messaging, combined with the chaos surrounding the academic term and its remediation, has become extremely stressful and divisive for members of the university community and particularly injurious to our students.”

CUPE 3903 previously filed an unfair labour practices complaint against York, in which it accused the school of “deliberately mischaracterizing” its bargaining positions in an effort to “unfairly damage the union’s public reputation.”

The university, meanwhile, has accused the union of pursuing a unreasonable package of concessions that would cost the school an additional $23 million over the life of the next collective agreement.