B.C. to give workers 3 days of paid sick leave for COVID-19 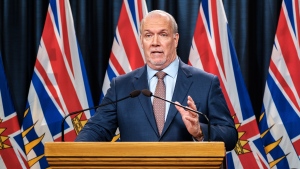 VICTORIA - Workers affected by COVID-19 in British Columbia will qualify for up to three days of paid sick leave under proposed legislation that Premier John Horgan says will plug holes in a federal plan and lay the groundwork for a permanent program.

Horgan said Tuesday that the pay would bridge the gap for workers between the time they first feel sick and when they can access the federal benefit, a pledge that some critics say doesn't go far enough.

“No one should have to make the difficult decision between staying home when they're sick and going into work because they have an economic imperative to do so,” Horgan said.

Labour Minister Harry Bains introduced amendments Tuesday to the Employment Standards Act that he said would be effective until Dec. 31 and apply to anyone who shows COVID-19 symptoms, self-isolates or gets tested.

Employers will be required to pay workers their full wages and those without an existing sick leave program will be reimbursed by the government $200 per day for each worker.

WorkSafeBC, the provincial injury prevention and safety agency, will begin administering the program next month and employers will be required to cover the difference for those workers who earn more than $200 a day.

Bains also said a permanent entitlement to paid personal injury and illness leave would take effect Jan. 1, 2022, although the number of entitlement days would be determined through consultation in the coming months.

“Having paid sick leave is good for businesses, good for workers, good for our communities and will help our economy recover faster,” Bains said in the legislature on Tuesday.

About half of B.C. employees do not currently have access to paid sick leave, according to government estimates.

British Columbia's proposed legislation closely matches the program introduced in Ontario, which has come under heavy criticism for falling short of what's needed to curb the spread of COVID-19, although the B.C. program doesn't expire in September.

Horgan said last month the province was considering its own sick-leave program after the federal government failed to bring in a national plan that would fill in the gaps of the Canada Recovery Sickness Benefit.

Critics have said workers who qualify for the federal benefit have faced delays getting the money and often get a pay cut, obstacles that push people to go to work even when they're not feeling well.

The federal program covers lost wages of $450 a week after taxes, which is less than B.C.'s minimum wage.

Horgan said he's been disappointed that the federal government has allocated $2.6 billion to the program but only managed to get $400 million out the door.

“That doesn't speak to the lack of need for the program, that speaks to the inadequacy of construction,” he said.

Neither he nor Bains could say how quickly the provincial funds would reach employees, but they said WorkSafeBC's existing relationship with employers will make it flow more quickly than programs created from scratch, such as some of the province's lagging pandemic relief for businesses.

Alex Hemingway, senior economist with the Canadian Centre for Policy Alternatives, warned that workers could find a new gap in support between the federal and B.C. programs.

Workers can apply to the federal program one week after they've been off work and on the condition they didn't receive employer-paid sick pay, Hemingway said. That means a worker who receives B.C. sick pay Monday to Wednesday may not qualify for federal support for the rest of that week, he said.

Two major union groups welcomed the news of a permanent paid sick leave program on the horizon, while saying the temporary COVID-19 measure is lacking.

“Although three days per calendar year is inadequate, today's announcement opens the door for future expansion,” Jerry Dias, national president of Unifor, said in a statement on Tuesday.

The B.C. Federation of Labour said it will advocate for up to 10 days of paid leave per year, as a basic public health protection and employment right for all. At the same time, it expressed concern with the limited temporary COVID-19 measure when sick workers face potential financial devastation from lost pay.

“Ensuring workers don't have to make the untenable decision between staying home with symptoms or working sick to put food on the table and pay the rent is critical during this deadly race between variants and vaccines,” president Laird Cronk said in a statement.

Horgan defended three days as “sufficient” time to get tested and then workers can access other support programs, including the federal benefit or workers' compensation for those who catch COVID-19 at work.

The Greater Vancouver Board of Trade said in a statement government-funded sick pay is appropriate during a global pandemic and it is critical that the program provides quick reimbursement to small businesses.

The Surrey Board of Trade said paid sick leave is about reducing transmission of COVID-19 and getting on the other side of the pandemic.

“Businesses in the hardest hit industries will finally get the support that they need,” president Anita Huberman said in a statement.

- By Amy Smart in Vancouver.